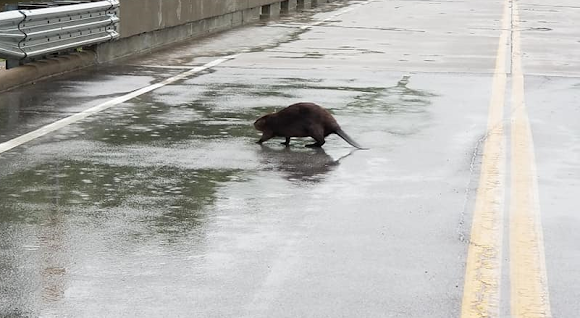 Flooding is getting bad here in SE Kansas, to the point that Beavers are fleeing their dams. It's pretty rare to see them so even crossing the highways (which are near the flooded rivers they inhabit) is a treat, if tragic. North American beavers, also called Canadian Beavers, have been important to humans in the past due to their furs and castoreums. On a more positive note, beavers affect stream quality, bird population, and even the spawning habits of salmon and trout. It's tragic to see the rainfall expatriate them from their homes.

I heard Australians referred to as free-range Canadians. And we've also been called "aberrations" of nature... like warm days in winter, four leaf clovers, and Australians.

Haha, I always said if I wasn't American I'd be Australian, I first heard it used by Steve Irwin, and loved it so I use it a lot.

She'll be right? That is a very Australian idiom.

Honestly the flooding here gets pretty common during this time of year, but not this bad. Our town is nestled next to a major river that runs through our State, a city further up has had similar problems to yours, being an industrial town the water was polluted and very dangerous. I'm sorry for your loss :(

Sad to hear about the floods in your part of the world. I can relate to this fellow. I lost just about everything in the Brisbane floods in 2011. Ours was a dirty and toxic affair as it flushed out industrial areas into residential. It's heart-wrenching to see animals displaced by these events, but they barely seem to get a mention.