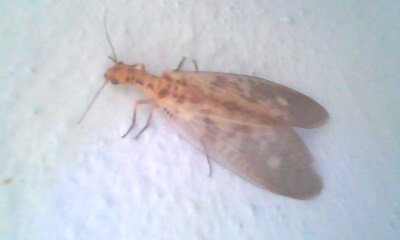 Adults can generally be found from late spring into the middle of summer, preferring to remain near bodies of water, particularly the ones where they grew up. Once they emerge as adults they mate, deposit their eggs near the water (often on overhanging vegetation), then die. They are primarily nocturnal, and like most aquatic insects, are commonly attracted to bright lights. (Courtesy@Wikipedia)

Thanks to all friends for your kind suggestion for this species.... I also think it is a Dobsonfly female after comparing different photographs available on web. Thanks to all once again.

I think it is a dobsonfly

This species is look like from Hemiptera Family? plz confirm me...