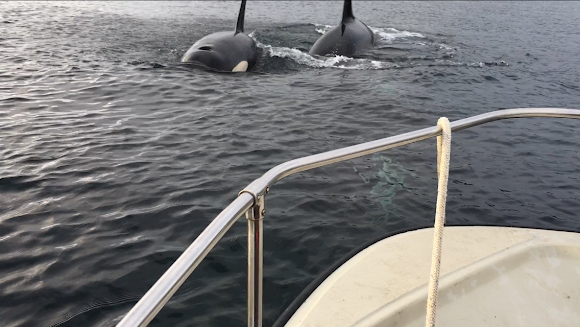 Orca’s lengths vary depending on the sex, female orcas tend to be 5 - 7 m in length, and male orcas are 6 - 8m in length. The dorsal fin of male killer whales (1.8m tall) is larger than the ones on females (1m tall, with a backward curve). Weight of male orcas is 3600 - 5400 kg, Females weight is 1400 - 2700 kg. Dolphins share the same in environment as these Orcas Orcas have a symbiotic relationship with a Barnacle, it’s a commensalism relationship. The Barnacles attach onto the Orcas for a free ride without harming anyone. Killer whales survive in their environment by being able to swim 45 kph but usually like to swim around 13 kph so they can cruise for longer periods of time. Orcas use sexual reproduction.

Orcas live in all oceans of the world. Most orcas live with their mothers all their lives. Killer whales feed on seabirds, squid, octopuses, sea turtles, sharks, rays and fish. No animal eats a living orca but when it dies seagulls and fish feed off of it. Orcas interact with other orcas and with the chemical and physical elements making up their environment.