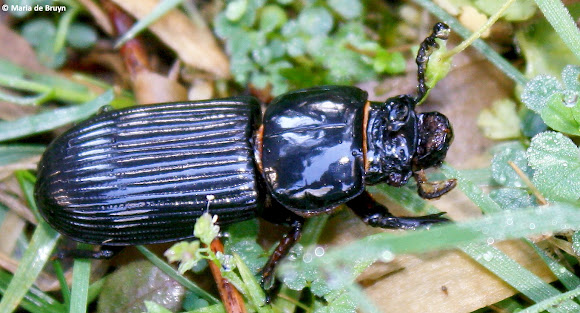 Nearly all of the 500-odd species are tropical; species found in North America are notable for their size, ranging from 20–43 mm, for having a single "horn" on the head, and for a form of social behavior unusual among beetles. Adult beetles live under rotting logs and chew up the wood so their offspring can eat it. They help the larvae construct the pupal case. Both adults and larvae must consume adult feces which have been further digested by microflora for a time. In addition, they are also able to produce fourteen acoustical signals, more than many vertebrates. Adults produce the sounds by rubbing the upper surface of the abdomen against the hind wings. The larvae produce the sounds by rubbing the third leg against a striated area on the coxa of the second leg.

Nearly all of the 500-odd species are tropical; species found in North America are notable for their size, ranging from 20–43 mm. This one was seen in a yard in North Carolina.

Prior to PNoah, I would have simply noted this beetle trundling along, looked at it a bit and moved on. Now I run inside to get my camera (which I also do before taking bugs found in the house outside. PNoah can influence one’s behavior! Hope I got the ID correct as I am NO insect expert.