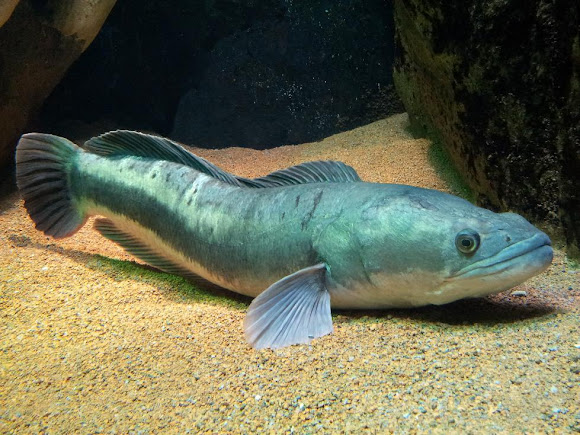 The giant snakehead is found in Vietnam, Indonesia, Laos, Thailand, Malaysia and possibly Burma. It has an oddly disjunctive distribution, inhabiting both Southeast Asia and southwest India, about 2500 km apart. The Indian population may be from an early human introduction, prior to the 19th century. In India, it is found in southern Tamil Nadu and through out Kerala, especially in Pechipparai, Chittar I & II, Neyyar and Temnalai Reservoirs. Ebanasar (1995) reported its distribution and biology from these reservoirs.

The giant snakehead has been reported already in six of the US states, including Wisconsin, Maryland, and parts of Virginia. (information from Wikipedia)

This spotting took place at Tulsa Zoo. After a lot of paperwork, a special USFWS permit was issued to transfer this fish from Toledo Zoo. He is nicknamed "Mr. Cuddles." ;-)

Thank you for the invitation but local missions only have a range of 300 miles, and I am not within that distance of your location. If you have questions about missions or any other topics, please refer to the FAQ: http://www.projectnoah.org/faq

the reptile man 7 years ago

join my mission the captive fish of the world mission pliz.

The giant snakehead is native to SE Asia but has been released into lakes in the US. This is bad news for native fish as the snakehead, which grows to 6 feet in length and weighs in at up to 66 pounds, is a fearsome and prodigious predator. Although ferocious, the giant snakehead is a surprisingly devoted parent. Both parents guard the nest will continue to fight in defense of their young once the eggs have hatched, taking on any organism brave or foolish enough to venture too close – including fisherman and swimmers. https://www.facebook.com/photo.php?fbid=...

The zoo used to have 2 others a number of years ago, and they were in the same large tank that was separated by a barrier. One morning we came to work and found that one had pushed through and had eaten the other. They definitely mean business.


As for length, I believe this fish is just over 1 meter.

This fish does have a handsome look to it

before they were illegal to own we had some friends who had two of them they would feed them goldfish, and one day the first one ate the other one. another time it escaped its tank and they found it under the couch 4 days later still alive.