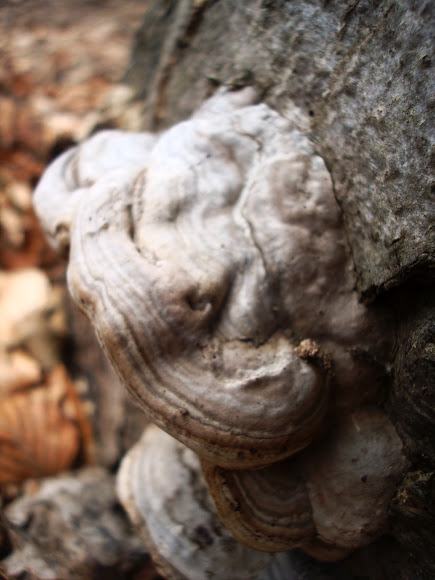 It is a species of fungal plant pathogen. The species produces very large polypore fruit bodies which are shaped like a horse's hoof and vary in colour from a silvery grey to almost black, though they are normally brown. It grows on the side of various species of tree, which it infects through broken bark, causing rot. The species typically continues to live on trees long after they have died, changing from a parasite to a decomposer. Fomes fomentarius has a fruit body of between 5 and 45 cm across, 3 and 25 cm wide and 2 and 25 cm thick, which attaches broadly to the tree on which the fungus is growing. While typically shaped like a horse's hoof, it can also be more bracket-like with an umbonate attachment to the substrate. The species typically has broad, concentric ridges, with a blunt and rounded margin.The flesh is hard and fibrous, and a cinnamon brown colour.The upper surface is tough, bumpy, hard and woody, varying in colour, usually a light brown or grey. The margin is whitish during periods of growth.The hard crust is from 1-2 mm thick, and covers the tough flesh.The underside has round pores of a cream colour when new, maturing to brown,[9] though they darken when handled.The pores are circular, and there are 2–3 per millimetre. The tubes are 2 -7 mm long and a rusty brown colour.

Though inedible, F. fomentarius has traditionally seen use as the main ingredient of amadou, a material used primarily as tinder, but also used to make clothing and other items.