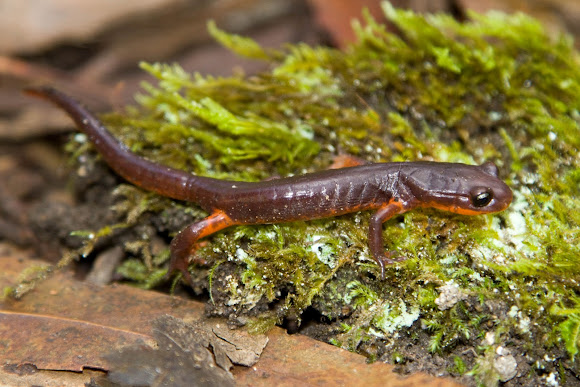 A medium-sized salamander. The legs are long, and the body is relatively short, with 12 - 13 costal grooves. Nasolabial grooves are present. The tail is rounded and constricted at the base, which will differentiate this salamander from its neighbors. Males have longer, more slender tails than females, and a shorter snout with an enlarged upper lip, while the bodies of females are usually shorter and fatter than the bodies of males. This subspecies is orange-brown to dark brown above, with orange coloring below, on the eyelids, and on the sides of the head, tail and body. Yellow to orange coloring is present on the base of the limbs. Young are dark above, with yellow or orange coloring on the base of the limbs. A bright yellow patch on the eye gives this salamander its common name

Ensatina live in relatively cool moist places on land becoming most active on rainy or wet nights when temperatures are moderate. They stay underground during hot and dry periods where they are able to tolerate considerable dehydration. They may also continue to feed underground during the summer months. High-altitude populations are also inactive during severe winter cold. Longevity has been estimated at up to 15 years.

When severely threatened, an Ensatina may drop its tail to distract the attention of a predator towards the writhing tail so the animal can crawl away to safety. The tail can be re-grown. The tail also contains a high density of poison glands. When disturbed, an Ensatina will stand tall in a stiff-legged defensive posture with its back swayed and the tail raised up and secrete a milky white substance from the tail, swaying the it from side to side. This noxious substance repels predators, although some experienced predators learn to eat all but the tail. If a person gets the poison on their lips, they will experience some numbness for several hours.1