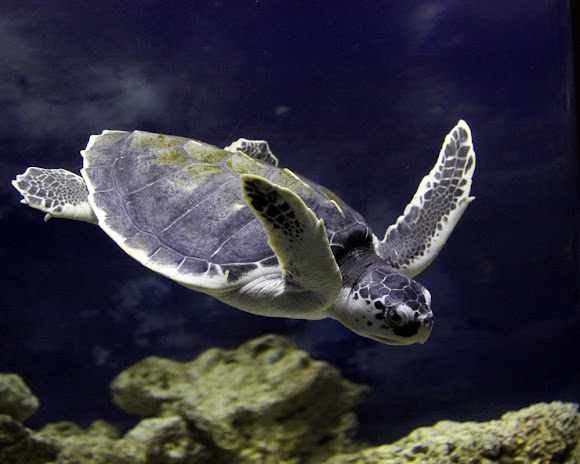 Habitat Adult Kemp's primarily occupy "neritic" habitats. Neritic zones typically contain muddy or sandy bottoms where prey can be found. Their diet consists mainly of swimming crabs, but may also include fish, jellyfish, and an array of mollusks. Depending on their breeding strategy, male Kemp's ridleys appear to occupy many different areas within the Gulf of Mexico. Some males migrate annually between feeding and breeding grounds, yet others may not migrate at all, mating with females opportunistically encountered. Female Kemp's have been tracked migrating to and from nesting beaches in Mexico. Females leave breeding and nesting areas and continue on to foraging zones ranging from the Yucatán Peninsula to southern Florida. Some females take up residence in specific foraging grounds for months at a time, leading scientists to suggest that females have a goal-oriented migration, opposed to the suggested wandering strategy employed by olive ridleys. Kemp's ridleys rarely venture into waters deeper than 160 ft (50 m) (Byles and Plotkin, 1994).

Adult Kemp's ridleys are considered the smallest marine turtle in the world. Their top shell (carapace) is often as wide as it is long and contains 5 pairs of costal "scutes". Each of the front flippers has one claw while the back flippers may have one or two. Kemp's ridley turtles are protected by various international treaties and agreements. They are listed in Appendix I of the Convention on International Trade in Endangered Species of Wild Flora and Fauna (CITES), which means that international trade of this species is prohibited. Kemp's ridleys are listed in Appendices I and II of the Convention on Migratory Species (CMS This link is an external site.). Kemp's ridleys are also protected under Annex II of the Specially Protected Areas and Wildlife (SPAW This link is an external site.) Protocol of the Cartagena Convention. Additionally, the U.S. is a party to the Inter-American Convention for the Protection and Conservation of Sea Turtles (IAC), which is the only binding international treaty dedicated exclusively to marine turtles.