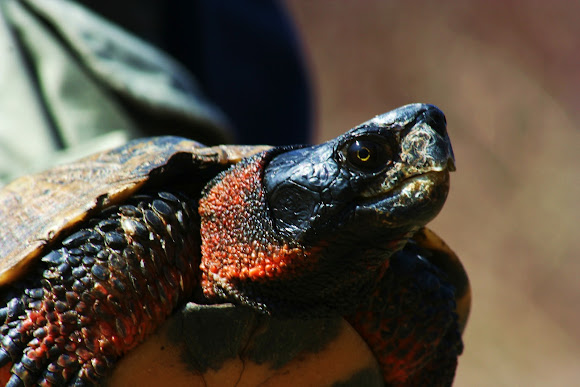 The wood turtle (Glyptemys insculpta) is a turtle endemic to North America. It is in the genus Glyptemys, a designation given to only one other turtle: the bog turtle. The wood turtle reaches a carapace length of 14 to 20 centimeters (5.5 to 7.9 in), its defining characteristic being the pyramidal pattern on its upper shell. Morphologically, it is similar to the bog turtle, spotted turtle, and Blanding's Turtle. The wood turtle exists in a broad range extending from Nova Scotia in the north (and east) to Minnesota in the west and Virginia in the south. In the past, it was forced south by encroaching glaciers: skeletal remains have been found as far south as Georgia. The wood turtle is omnivorous and is capable of eating on land or in water. On an average day, a wood turtle will move 108 meters (354 ft), a decidedly long distance. Many other animals that live in its habitat pose a threat to it. Raccoons are over-abundant in many places and are a direct threat to all life stages of this species. Inadvertently, humans cause a large number of deaths through habitat destruction, road traffic, farming accidents, and illegal collection. When unharmed, it can live for up to 40 years in the wild and 58 years in captivity.

It spends a great deal of time in or near the water, preferring shallow, clear streams with compacted and sandy bottoms. The wood turtle can also be found in forests and grasslands, but will rarely be seen more than several hundred meters from flowing water. It is diurnal and is not overtly territorial. It spends the winter in hibernation and the hottest parts of the summer in estivation.

Took these photos on a Wood Turtle monitoring project. The exact Lat and Long are not correct to protect the population of turtles.

Wow! That's pretty awesome. They have radio tagged some of these guys and found them really really far from their home streams so they are quite mobile.

Yes - years ago I bought a baby wood turtle from theturtlesource.com and raised him in a small garden pond on the side of my house and three years later moved him to a larger natural pond in the back of the house for the winter where he hibernated. In spring I couldn't find him in the big pond and he couldn't get to the old pond because it had a barrier on the side his new pond was on so he couldn't even see it as he was 15fee lower in elevation. The only way for him to get back to his old pond was to walk 100 feet east. 70 feet south (around my house) and then 100 feet west (to the other side of the house) where there are steps leading down to the pond where he grew up. Later in the spring I found him in front of those steps heading for his old pond. There is no way he would have known to take that route - it appears he just figured it out. They grow fast too, for turtles.

I did not know that Orbem, thanks for the info! They really are a neat animal. I am fortunate to have been invited on the monitoring project.

Nice pics! You didn't mention that N.A. Wood Turtles could be the smartest turtles of all?

This is actually a conglomeration of 5 wood turtle spottings over the course of the day. I didn't think I should create 5 spottings so I posted 1 pic of each turtle.

Thanks Atul and Shanna!

Wow, photo 3 is my favourite. It shows off his red colouring beautifully. : )