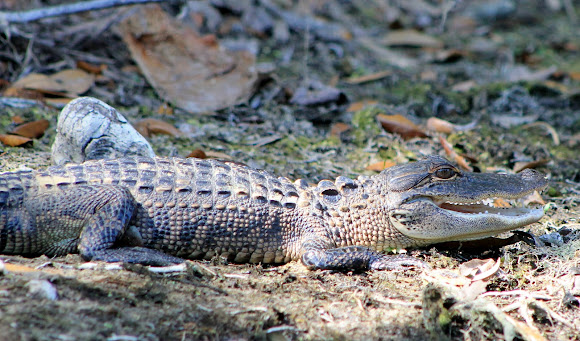 The American alligator (Alligator mississippiensis), sometimes referred to colloquially as a gator, is a reptile endemic only to the Southeastern United States. It is one of the two living species of alligator, in the genus Alligator, within the family Alligatoridae. It is larger than the other extant alligator species, the Chinese alligator. The American alligator inhabits wetlands that frequently overlap with human-populated areas The American alligator has a large, slightly rounded body, with thick limbs, a broad head, and a very powerful tail. Adult Alligators generally have dark grey or nearly black color. They may at times appear to be lighter based on detritus or algae in the water covering their skin. Juvenile alligators have a striped pattern for camouflage that they lose as they mature. Averaging about 9.5 in (24 cm) in length when newly hatched, alligators reach sexual maturity when they measure about 5–7 ft (1.5–2.1 m).[3] Adult male alligators average 11.2 ft (3.4 m) in length, while adult females average 8.2 to 9.8 ft (2.5 to 3.0 m).[4][5][6][7] Average adult body weights are reported from 270 to 800 lb (120 to 360 kg), with a few exceptionally large and old males exceeding 14 ft (4.3 m) and 1,000 pounds (450 kg).[8][9][10] The largest alligator on record was captured in Louisiana in the early 1900's and reached a length of 19 feet 2 inches (5.84 m) and 2,200 lb (1,000 kg). [11] The second largest was 14 feet and 3.5 inches, from Florida. [12][13]The tail, which accounts for half of the alligator's total length, is primarily used for aquatic propulsion. The tail can also be used as a weapon of defense when an alligator feels threatened. Alligators travel very quickly in water and while they are generally slow-moving on land, alligators can lunge short distances very quickly. They have five claws on each front foot and four on each rear foot. American Alligators have the strongest laboratory measured bite of any living animal, measured at up to 9,452 newtons (2,125 lbf) in laboratory conditions. It should be noted that this experiment has not (at the time of the paper published) been replicated in any other crocodilians.[14] Some alligators are missing an inhibited gene for melanin, which makes them albino. These alligators are extremely rare and almost impossible to find in the wild. They could survive only in captivity. Like all albino animals, they are very vulnerable to the sun and predators.[15] American Alligators can remain underwater for several hours if not actively swimming or hunting (then it is only about 20 minutes); they do this by rerouting blood to reduce circulation to the lungs, and thus the need for oxygen

American alligators are mostly found in the Southeastern United States, from Great Dismal Swamp in Virginia and North Carolina, south to Everglades National Park in Florida and west to the southern tip of Texas. They are found in the U.S. states of Virginia, North Carolina, South Carolina, Georgia, Florida, Louisiana, Alabama, Mississippi, Arkansas, Texas, and Oklahoma. Florida and Louisiana currently have the largest population of alligators. Florida has an estimated population of 1 to 1.5 million while Louisiana has an estimated population of 1.5 million Although primarily freshwater animals, alligators will occasionally venture into brackish water.[16] Alligators live in wetlands and this is the vital habitat that holds the key to their continued long-term survival. Alligators depend on the wetlands, and in some ways the wetlands depend on them. As apex predators, they help control the population of rodents and other animals that might overtax the marshland vegetation. American alligators are less prone to cold than American crocodiles. Unlike the American crocodile, which would immediately succumb to the cold and drown in water of 45 °F (7.2 °C), an alligator can survive in such temperatures for some time without any signs of evident discomfort.[17] It is thought that this adaptiveness is the reason why American alligators spread farther north than the American crocodile.[17] In fact, the American alligator is found farther from the equator and is more equipped to deal with cooler conditions than any other crocodilian.[18] In Florida, alligators face ambient temperature patterns unlike elsewhere in their range. The consistently high temperatures lead to increased metabolic cost. Alligators in the Everglades have reduced length to weight ratio, reduced total length, and delayed onset of sexual maturity compared with other parts of their range. The reason for this poor condition is currently suspected to be a combination of low food availability and sustained high temperatures.

The breeding season begins in the spring. Although alligators have no vocal cords, males bellow loudly to attract mates and warn off other males during this time by sucking air into their lungs and blowing it out in intermittent, deep-toned roars. Male alligators are also known to use infrasound during their mating behavior, as one of their routines is to engage in bellowing in infrasound while their head and tail are above the water, with their midsection very slightly submerged, making the surface of the water that is directly over their back literally "sprinkle" from their infrasound bellowing, in a so-called "water dance".[23] Recently it was discovered that on spring nights alligators gather in large numbers for group courtship, the so-called "alligator dances".[24] Alligator nest and young in Florida The female builds a nest of vegetation, sticks, leaves, and mud in a sheltered spot in or near the water. After she lays her 20 to 50 white, goose egg-sized eggs, she covers them under more vegetation, which, like mulch, heats as it decays, helping to keep the eggs warm. This differs from Nile crocodiles who lay their eggs in pits.[17] The temperature at which alligator eggs develop determines their sex. Those eggs which are hatched in temperatures ranging from 90 to 93 degrees Fahrenheit (32 to 34 °C) become males, while those in temperatures from 82 to 86 °F (23 to 30 °C) become female. Intermediate temperature ranges have proven to yield a mix of both male and females. The female will remain near the nest throughout the 65-day incubation period, protecting the nest from intruders. When the young begin to hatch they emit a high-pitched croaking noise, and the mother quickly digs them out. Juvenile American alligator swimming, showing the distinctive yellow striping found on juveniles The young are tiny replicas of adult alligators with a series of yellow bands around their bodies. They find their way to water after hatching. For several days they continue to live on yolk masses within their stomachs. The baby spends about five months with the mother before leaving her. Snapping turtles, large snakes, raccoons, largemouth bass, American black bears, large raptorial birds such as great horned owls and bald eagles and even larger alligators prey upon young alligators. The adult alligator may grow up to prey upon many of the same species. Alligators reach breeding maturity at about 6 to 10 years of age, at which time they are about 6 to 7 feet (1.8–2.1 m) long. From then on, growth continues at a slower rate. The oldest males may grow to be 16 feet (4.85 m)[25] long and weigh up to 1,200 pounds (510 kg) during a lifespan of 30 or more years. A recent study by scientists from the Savannah River Ecology Laboratory in South Carolina reveals that up to 70 percent of A. mississippiensis females chose to remain with their partner, often for many years.[26]