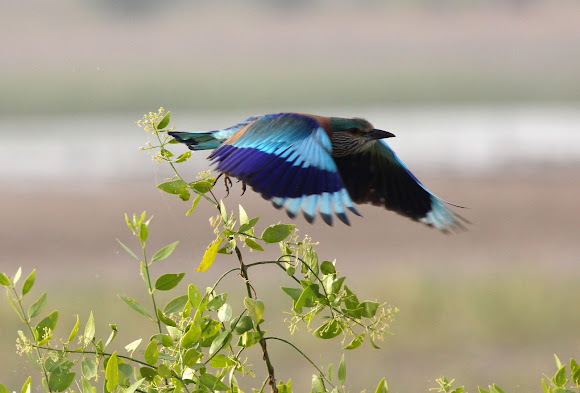 Its crown and vent have a distinguished blue color.In flight, the Indian Roller flaunts the brilliant combination of colors on its feathers. This beautiful bird has a mesmerizing sky blue colored tail with a hint of Prussian blue color. The feathers towards the centre have a dull green tint. Its throat and neck is noted to be purplish lilac in color with dash of white streaks.The deep color of the grayish brown eyes of the Indian Roller compliments its beauty. Its blackish brown bill has a hooked tip. The Indian Roller acquires its name from the striking aerobatics it displays as an act of courtship.During the course of the display the Indian Roller bird flies high up in the sky and descends downwards in a circular motion, flapping its winds rapidly. It also produces harsh chack sounds during the act.

This is a bird that prefers open country with scattered trees. It may be found in farms and in cities at lower elevations but avoids heavy jungles.

The Indian Roller has been chosen as the state bird by the Indian states of Andhra Pradesh, Bihar, Karnataka and Orissa.

Thank you all so much !

Thank you so much all!

incredible shot of a beautiful bird!

Thanks Leanne and Karen!

Thank you so much everyone :-)