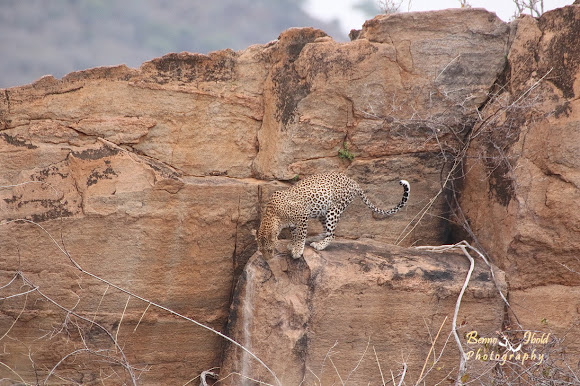 Compared to other members of Felidae, the leopard has relatively short legs and a long body with a large skull. It is similar in appearance to the jaguar, but has a smaller, lighter physique. Its fur is marked with rosettes similar to those of the jaguar, but the leopard's rosettes are smaller and more densely packed, and do not usually have central spots as the jaguar's do. Both leopards and jaguars that are melanistic are known as black panthers.

Many rock formations in the mid of a extendet savannah

Second spotting of a leopard this years safari. The leopard is listed as vulnerable on the IUCN Red List because leopard populations are threatened by habitat loss and fragmentation.

Beautiful series Benno,fantastic animal,congrats on the well deserved SOTW and thanks for sharing

A wonderful spotting, Benno. And how fortunate to have seen a leopard during daylight hours. That's a rarity in many areas. Amazing country too. I've rattled around many of the tracks in Tsavo East and West. Seeing this makes me want to return. Congratulations on your SOTW.

Congratulations Benno, we may have missed it last year but this beautiful series has been voted Spotting of the Week! The setting of these shots highlighting the leopard's natural habitat won you the vote.

"Our Spotting of the Week is so well camouflaged you hardly noticed its presence in this rock formation! Solitary and secretive, leopards (Panthera pardus) are known for their climbing ability, and can often be seen descending head first. Rocky outcrops like the one seen here provide cover for resting leopards and their young. Leopards are widely distributed throughout Africa and Asia, with nine recognized subspecies. However, populations have become reduced and fragmented, and leopards are now extirpated from large portions of their historic range. Leopards are globally assessed as Vulnerable by the IUCN".

I love the first shot. Thanks for information Benno.

Wonderful to see in the wild.