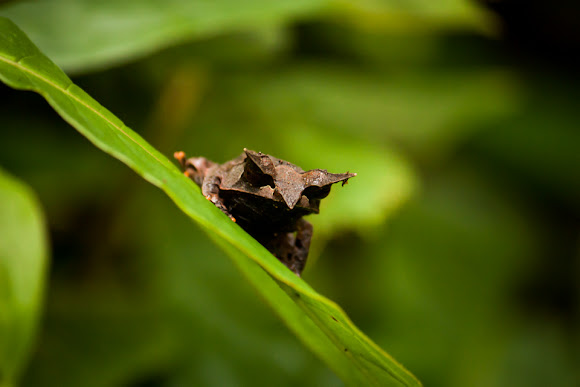 Frog with orange toes in the Megophrys genus seen on the trail from Lempur to Renah Kemumu in the Kerinci Seblat National Park, Sumatra, Indonesia. Elevation between 1000m-1200m. More photos of my trip here: https://www.facebook.com/media/set/?set=...

Spotting of the Day, April 4, 2012 "The Long-Nosed Horned Frog or Malayan Horned Frog, is a large frog species found in rainforests among leaf litter. It typically feeds on spiders, small rodents, lizards and other frogs." This one was still small, as can be seen in the pictures.

I contacted Professor Djoko Iskandar, and he said it is Megophrys nasuta. They have a lot of color variations. Orange toes are not common, he says, they are usually black ventrally. http://en.wikipedia.org/wiki/Djoko_Iskan... http://www.sith.itb.ac.id/profile/djoko....

Hi, Luke. This is one great-looking frog. It appears to have been placed in the "Reptiles of the World" mission by mistake. When you get a moment, will you please remove it. Thanks! :-)

Thanks everyone! Not gonna lie, it was quite a thrill when I saw this picture was chosen. Happy spotting!

Congrats and what an interesting looking frog.

Thank you so much!

Congratulations Luke! This gorgeous frog was chosen as Spotting of the Day!

"The Long-Nosed Horned Frog or Malayan Horned Frog, is a large frog species found in rainforests among leaf litter. It typically feeds on spiders, small rodents, lizards and other frogs."

I mean crop this front picture and show bigger pose of it in separate picture like close up.

I rearranged the order so the second picture now shoes up as the cover image. Is that what you mean?

Luke.. Request you to crop second picture add it as separate one. It will be striking image.

Its a perfect camouflage! and must be really hard to find him/her!

It's nice and as well take a look at image 3 how it camouflages with brown leaves.

Hmm... You may be right Luke. The distribution information I had for M. nasuta didn't include Indonesia, which is why I omitted it from consideration, but some sources DO list Indonesia as part of its range. And you're right, I've yet to spot another photo with the orange toes either.

I would lean more towards Megophrys nasuta than montana, especially considering Megophrys montana is endemic to Java, not Sumatra. Neither of them seem to have the orange toes, however, at least in any of the pictures I've seen.