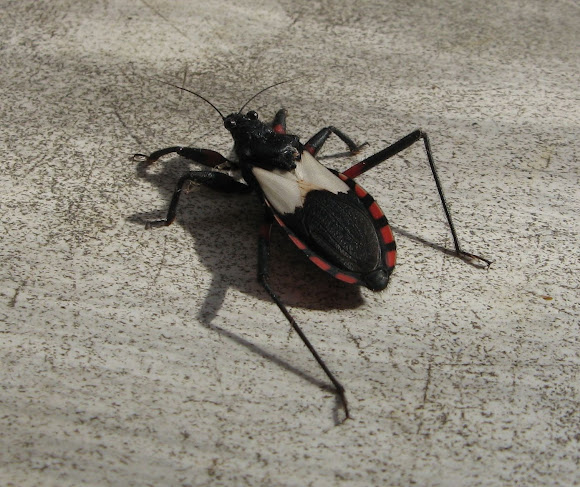 The featured bug of this spotting is, as tmvdh identified it, an Assassin bug. I erroneously named it a Kissing Bug, assuming Assassins and Kissers were synonyms of the same bug. For the record, Kissing Bugs and Assassin Bugs are both members of the same family (Reduviidae). The Reduviidae are members of the suborder Heteroptera of the order Hemiptera. The family members are almost all predatory, except for a minority that are blood-sucking species (Kissing Bugs) of importance as vectors for Chagas disease. This Assassin Bug’s head, thorax and wingtips are black as are its legs except for the second segment of each leg, which is orange/red. The front portion of its wings are white. The abdomen is flared and has orange/red stripes around the edge. This individual was nearly 2 cm long. There are 12 species in the genus Microtomus, but little can be found on the individual species. The published scientific note by PN member Torsten van der Heyden supplies key information on this particular species here: https://buff.ly/2W6k2uA

All 12 species of Microtumus are found in the Western Hemisphere. M. cinctipes has been identified in Argentina, Bolivia, Brazil, Colombia, Costa Rica, Ecuador, Guyana, Nicaragua, Peru, Trinidad and Tobago, the United States of America and Venezuela. This particular insect was found in our house in the Amazon rainforest of SE Ecuador. The first two pictures are taken in our house, the third outside. It is the same bug. While they don’t eat plants or leaves, they can often be found there as they stalk other insects.

Assassin bugs are so named because they prey on other insects. They have a strong “beak” with which they repeatedly stab their prey while holding them with their strong forelegs. Larger ones can inflict a painful “bite” to humans if carelessly handled.

Thanks Mark. It certainly appears be a candidate for Rhinoplasty, however then it would starve to death :-)

Thank you Lauren for pointing out the erroneous common name. I really appreciate it as I want to keep the information as accurate as possible. I trust all others who have commented will see the correction.

Beautiful Assassin! Be sure to change the name away from Kissing Bug. These are predators and not blood feeding Triatomines. It's size and wing coloring is similar to the large Triatomines in Mexico (ie: Triatoma pallidipennis).

Thanks Mauna. I was running into all sorts of problems trying to ID it. I was grateful for the help too.

Truly an awesome accomplishment, Tukup. Congratulations! Congrats to tmvdh as well for identifying the bug and publishing it in the literature.

Thanks Sukanya. I knew about the paper but the SOTD is special.

Thanks much Daniele. I was really happy that tmvdh could give me a positive ID on this bug. This is a surpise. Thanks again.

Congratulations Tukup, this kissing bug is our Spotting of the day, and it comes with a published scientific note, courtesy of tmvdh!

"This reduviid bug (Microtomus cinctipes) is our Spotting of the Day, and it comes with a published scientific note! Assassin bugs (family Reduviidae) are a large cosmopolitan family in the order Hemiptera (true bugs). Within the subfamily Hammacerinae (=Microtominae), the genus Microtomus contains 12 species restricted to the New World. Microtomus cinctipes was first recorded in Ecuador as a single male collected in June 1971. This spotting by our member Dwain “Tukup” Holmes represents the first confirmation of the presence of this species in Ecuador since then. This finding has just been published as part of scientific note on the distribution of M. cinctipes by independent entomologist Torsten van der Heyden. Torsten has previously published other notes based on Project Noah spottings. A Project Noah member himself, he runs our popular mission on Insects of Costa Rica:
https://buff.ly/2W0Uzmc
Read Torsten's publication here: https://buff.ly/2W6k2uA "

Well done Tukup! In a short amount of time you've already made a big impact on our community. We're delighted to have you here!

Thanks Mauna. Too many people we know here with this disease.

Great spotting and info, Tukup. It’s a nice refresher on Chaga’s Disease for me.

Thanks much for the ID tmvdh. I finally found a website (Royal Swedish Academy) that supports your ID. If you have other links you could share on the M. cinctipes, I'd appreciate it.