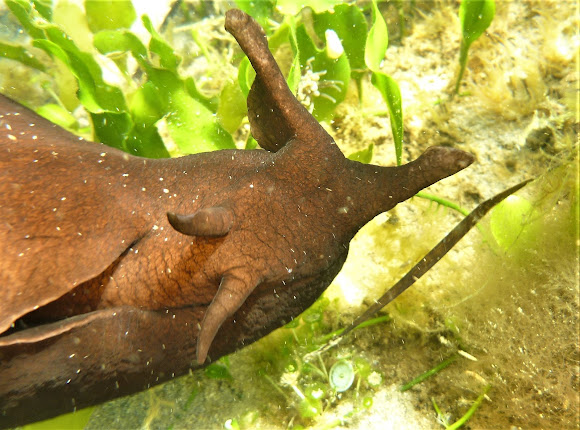 This is my 2000 spotting FILO: Mollusca CLASS: Gastropoda SUBCLASS: Opistobranchia ORDER: Anaspidea SUBORDIN: Aeolidina FAMILY: Aplysiidae Description: Black sea hares are large up to 30 cm and weigh up to 1 kg. They have a very thin and domed watch glass-shaped shell, with a recess at the top that is covered by the mantle. The shell is very brittle and can measure up to 50mm in size. Its body is very soft. The foot has on both sides some lobes called parapodia, which cover almost the entire back and help the animal to swim and which in this species are not united in the tail. The head has very short, rolled and spoon-shaped rhinophores, similar in appearance to rabbit ears (hence its name); with the eyes directly in front and at the base. The color is dark dark brown and may have a dark reticulate or a pink to off-white stippling. The edge of the mantle and the rhinophores can be white to reddish as in the case of the photograph. Biology: Their diet is based on plants and algae. They are hermaphrodites and reproduce throughout the year, although the peak is in spring, with one animal coupling to another. Mating chains of various individuals can form. They deposit egg cords in surface waters that can measure several meters, are gelatinous and can harbor millions of eggs. Its swimming is elegant using the parapodia undulating and with continuous contractions of the whole body. To adopt a more aerodynamic position, the foot is placed longitudinally and the rhinophores place them backwards. To see them more actively, they can be seen better at night. When disturbed, they can secrete a white to violet substance that is not poisonous.

Salty coastal lagoon Mar Menor (Murcia-Spain). Live in plant colonies near the coast, especially on algae such as Ulva, Polysiphonia and plants such as Zostera, on sandy, muddy and rocky bottoms. Usually up to the first 20 meters, although it can be found at greater depth. When disturbed, they can secrete a white to violet substance that is not poisonous.

This is the first copy of Aplysia that I see in the Mar Menor because it is a high salinity lagoon and they could not live here. In recent times there have been changes in the biodiversity of the lagoon, such as the decrease in the amount of salt due to the opening of gullies and the entry of water from the Mediterranean Sea that is less saline and for this reason the sea hare is adapting to this medium. My video of Aplysia fasciata: https://www.youtube.com/watch?v=gYG1T3vH...

Congratulations for your 2,000 spotting! 👏🏻👏🏻👏🏻
This is a wonderful creature to mark this number. I love how elegant they look when they swim!

Congrats on 2k !!
Fabulous spotting too.

Also love the video of this critter swimming!