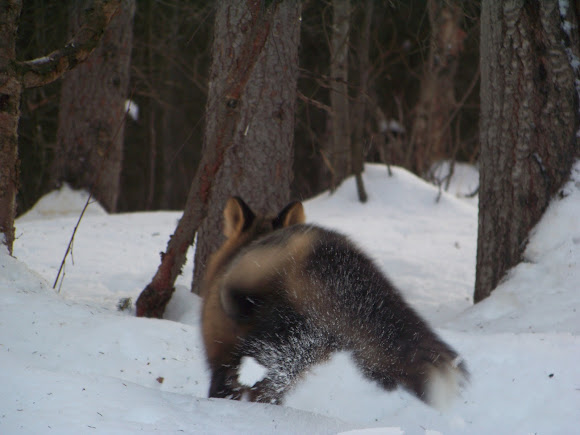 The red fox is usually recognized by its reddish coat, its white-tipped tail, and black “stockings,” although the species does have many color variations. The outside of the ears may be black-tipped, while the inside is usually white. The white tip on the tail will distinguish this fox from other species, regardless of its color phase. Red is the most common color, but the hair may be from light yellowish to deep auburn red. Several color phases can occur in one litter. Red foxes displaying a distinct color pattern are referred by the name of that phase (i.e., red, cross, silver, black). The cross fox, for example, has a black/brown cross on the back and shoulders. The silver and black phases are similar. However, the black does not have the silver-tipped guard hairs characteristic of the silver fox. The occurrence of black-silver phase appears to increase toward the north and the northwest of Alaska. However, even where most abundant, it comprises less than 2 percent of the population.

The red fox is common in most of northern North America. It is found throughout Alaska, except for some of the islands of Southeast Alaska and the western Aleutians and is rare in Prince William Sound. It is native to Kodiak Island but is an introduced animal on many islands in the state as a result of fox farming operations in the early 1900s. Red fox populations in Southeast Alaska are sparse, but the animal is found in the Taku and Stikine river valleys and the Mendenhall Flats. Red foxes have also been seen on Douglas Island near Juneau. The fox prefers broken country, extensive lowland marshes, and crisscrossed hills and draws. It is most abundant south of the arctic tundra. It is also present in tundra regions, which it shares with the Arctic fox. Where the ranges of the two species overlap, the red fox is dominant. In these areas, red foxes have been observed digging white (Arctic) foxes from their dens and killing them.

Haven't seen this little guy for a few weeks now. Early Feb, there was another fox coming late when I couldn't see it. I'm assuming mating was going on and maybe!!! I'll get to see the kits? Fox have been coming here for a few years now, until now always red, this cross fox just showed up in late Sept, possible kit from last year? Looks very young, clean teeth etc. Not sure of sex, thinking it's a male??

Posed for an image and left to hunt. Just beautiful.

Welcome to Project Noah!
Like the light in the eyes on the second photo