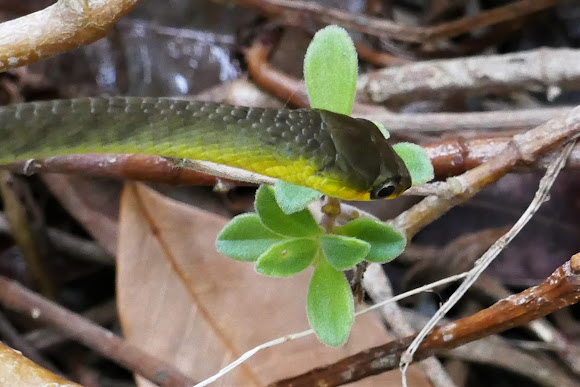 Dendrelaphis punctulata, also known as the "common tree snake", is an Australian native in the family Colubridae. Adults can reach upwards of 2 metres (200 cms) in length, but 120 cms is about average. This spotting was larger than a new hatchling as it's length was somewhere between 30-40 cms, and width about the size of a pencil, but still a very young snake. It's body was sleek and slender with a very thin, whip-like tail. This species of snake is diurnal (active by day), and non-venomous to humans. Beautifully coloured with the classic olive green and yellow markings, although this can vary greatly amongst individuals. The eyes of this species are larger than in most snakes. Found in a variety of habitats ranging from rainforest to woodland to urban areas where it preys on fish, frogs and other small animals.

Spotted amongst the shrubbery in the gardens of the Metroplex on Gateway estate, Brisbane. There's lots of dense foliage and leaf litter, so there are plenty of hiding places. The wetland area is only a stones throw from this spotting location.

The third photo shows the snake's position when it was initially spotted, and at first I though it was a stick. Very well-camouflaged, it was only it's slender form, particularly the long, tapered tail, and it's colour that made me look twice. I've only seen one green tree snake before at this general location.

Nothing beats a good snake-induced cardio session. It's great to be alive ;)

Well there's only ten colubrid species in Aus and by far mostly north of NSW where we don't go. Too busy hopping away from deadly elapids anyway. Hema nothing gets your blood pumping as fast as a very local snake alert. 8-)

They're well-camouflaged, Mark, so you've probably walked passed many without even realising it. They are a beautiful species. And sorry to hear that, Hema. It's always an exciting occasion when I spot any snake. Rest assured, they are out there... waiting!!

Hema Shah a year ago

Did not see a single snake on my visit

Sweet. Very few colubrid species in Aussie. I have never seen one.