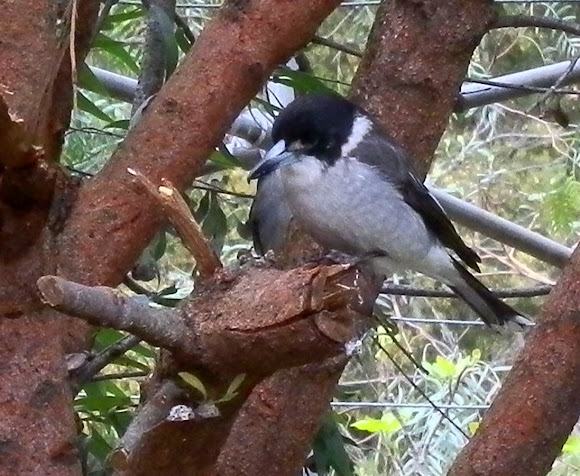 This spotting is especially to illustrate the feeding habit of the grey butcherbird. Around this tree, this handsome little visitor would usually find a skink, bash it against the trunk and fly away with a floppy lizard in its bill. It had no luck today so I threw out small bits of cheese and was delighted to see the bird skewer a piece of cheese in a fork formed by a broken branch (pic 1). The bird sat there for awhile and gradually broke off bits of the cheese, eating it at leisure. It was soon joined by its mate (partially visible in pic 2). Pic 3 shows a satisfied bird before it flew away.

Butcherbirds are so called because of this habit - they store their food on forks in tree branches or skewer them, for a later meal.
It was amazing to witness this behaviour in your own back yard !
Their interesting call sounds like a string of sounds from the one bird but is actually made up of two parts, each bit sung by one of the pair.