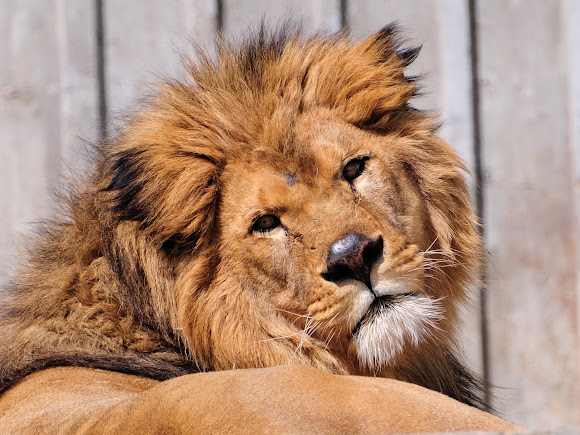 The lion is the second-largest living cat after the tiger. Until the late Pleistocene, about 10,000 years ago, the lion was the most widespread large land mammal after humans. Wild lions disappeared from North Africa and Southwest Asia in historic times. Nowadays, the lion is a vulnerable species, having seen a possibly irreversible population decline of thirty to fifty percent over the past two decades in its African range. Within Africa, the West African lion population is particularly endangered.

At the Zoo de Madrid

Zoos are always a strange mix of joy and sadness. Joy to watch beautiful animal and the sadness to assist, maybe, to the last episode of their extinction.

Obrigado Antonio!
Zoos generate always mixed fealings inside me, but I started to discover nature through them as a child who ws leaving in a big town, and nowadays I take my 7-year old daughter to them. I still think it is a good start and zoos can play an imporrtant role to help save endangered species. They can work as a DNA reserve and in some cases they were useful to reintroduce almost extint species in nature.
But still, they generate sad fealings...

Thanks Karen, yes it is a bit sad

"Zoos are always a strange mix of joy and sadness"
i never go to zoo´s because of that Arlanda,beautifully sad

Nice portrait arlanda!
He looks a little sad to me though!