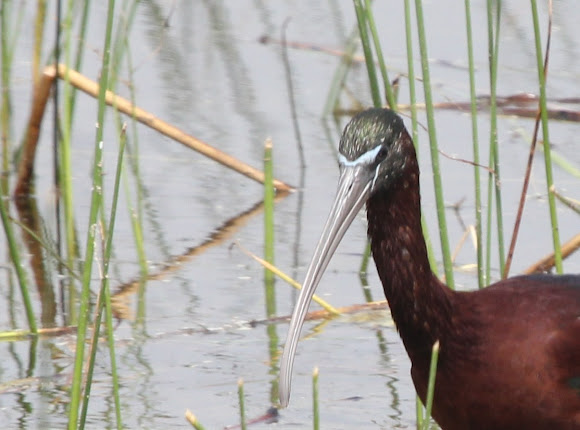 Glossy Ibises undertake dispersal movements after breeding and are very nomadic. The more northerly populations are fully migratory and travel on a broad front, for example across the Sahara Desert. Populations in temperate regions breed during the local spring, while tropial populations nest to coincide with the rainy season. The diet of the Glossy Ibis is variable according to the season and is very dependant on what is available. Prey includes adult and larval insects such as aquatic beetles, dragonflies, damselflies, grasshoppers, crickets, flies and caddisflies, leeches, molluscs, crustaceans and occasionally fish, amphibians, lizards, small snakes and nestling birds. Breeding adults have reddish-brown bodies and shiny bottle-green wings. Non-breeders and juveniles have duller bodies. This species has a brownish bill, dark facial skin bordered above and below in blue-grey (non-breeding) to cobalt blue (breeding), and red-brown legs. Unlike herons, ibises fly with necks outstretched, their flight being graceful and often in V-formation. Sounds made by this rather quiet ibis include a variety of croaks and grunts, including a hoarse grrrr made when breeding.

Seen at a marshy wetland known as Nalsarovar Bird Sanctuary.

Details from wikipedia. Clicked by Atul, uploaded with his permission.

Edited and uploaded a closeup.