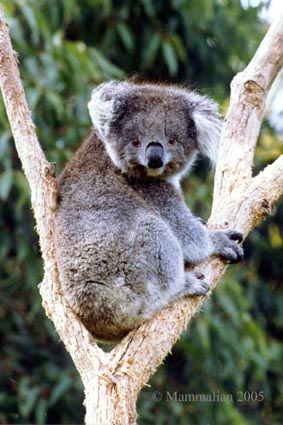 Phascolarctos – ‘pouched bear’ referring to the tail-less, bearlike appearance of this species. cinereus – ‘ash-coloured’ referring to the Koalas’ coat colour. The rounded shape of the Koala is due to their very large intestines, which are needed to help digestion. Well adapted to tree climbing, all four feet have thumbs (two on the front and one on the back) and very sharp claws. The grey and white body fur is soft. Males have an oil gland at the centre of the chest, which emits a strong odour and is used to mark territory. A solitary and territorial animal, Koalas are mainly active at night. During breeding season the males can be heard making deep gutteral calls, and the females a high pitched cat-like squeal. Most of the day is spent resting in the fork of a shaded tree. The Koalas diet is almost totally that of eucalypt leaf, with each adult consuming around a kilogram of leaves per day. They generally move between trees at night via the ground, and drink very little water, as their moisture requirements are obtained from the leaves themselves. Breeding occurs August-February, with a single joey being born (twins have been known). Gestation is 35 days. The young stay in the pouch for 6-7 months whilst feeding from one of two teats in a vertical pouch. It will then cling to its mothers back until being weaned - at around 12 months of age. By 18 months it is independent, and will move away and establish its own home range. Females reach sexual maturity at the end of their second year - physical maturity at the end of their fourth. Males reach sexual maturity at 2-3 years and physical maturity at the end of their fifth. Animals have lived to 18 years in captivity.

Koalas can be found living in defined home ranges from the tropics to the cool-temperate areas in open eucalypt forests and woodlands, especially along watercourses in the inland part of their region.

Many years ago, large numbers of Koalas were killed for their fur. Habitat destruction, bushfires, motor vehicles and dogs are now their greatest threats.

Thanks a lot Paw Printz for confirming, nice to have such lovely spotting,
thanks for sharing,

The copyright is me :)

Very helpful info by you Paw Printz, nice spotting, as image shows this one is copyrighted image, hope you had seek permission and if so done than kindly mention that over note, which will helpful,

again thanks for nice info.