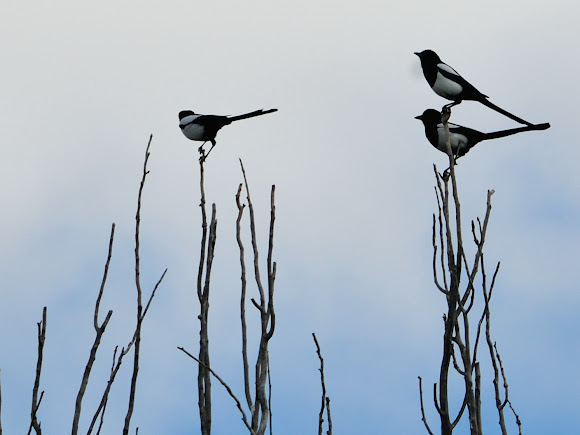 The Eurasian Magpie is one of the most intelligent birds, and it is believed to be one of the most intelligent of all animals. The expansion of its neostriatum (subcortical (i.e., inside, rather than on the outside) part of the forebrain) is approximately the same in its relative size as is found in chimpanzees, orangutans and humans. The Eurasian Magpie is 44–46 centimetres in length - in the adult over 50% of this is tail - and a wingspan of 52–62 centimetres. Its head, neck and breast are glossy black with a metallic green and violet sheen; the belly and scapulars (shoulder feathers) are pure white; the wings are black glossed with green or purple, and the primaries have white inner webs, conspicuous when the wing is open. The graduated tail is black, shot with bronze-green and other iridescent colours. The legs and bill are black.

The Eurasian Magpie is a resident breeding bird throughout Europe, much of Asia and northwest Africa. It is the only magpie in Europe outside the Iberian Peninsula. Magpies are common to suburban areas but can be more shy and cautious in country areas. The birds do not avoid humans unless they are harassed. Sometimes two or more birds display "teasing" behaviour towards animals such as cats. It is thought that this behaviour may be to scare away potential predators and egg thieves.

The Eurasian Magpie is believed to be among the most intelligent of birds, and among the most intelligent of all animals. Magpies have been observed engaging in elaborate social rituals, possibly including the expression of grief. Mirror self-recognition has been demonstrated in European magpies. The magpie is thus one of a small number of species, and the only non-mammal, known to possess this capability. The cognitive abilities of the Eurasian Magpie are taken as evidence that intelligence evolved independently in both corvids/crows and primates. This is indicated by feats such as tool use, their ability to hide and store food across seasons, episodic-like memory, and the ability to use one's own experience in predicting the behavior of conspecifics. Various behaviours have been observed that indicate intelligence. It has been observed that they cut up their food in correctly sized proportions, depending on the size of their young. In captivity magpies have been observed counting up to get food, imitating human voices, and regularly using tools to clean their own cages. In the wild, they organise themselves into gangs, and use complex strategies when hunting other birds, and when confronted by predators. Along with the Jackdaw, the Eurasian Magpie has been found to have a neostriatum approximately the same relative size as is found in chimpanzees and humans, and significantly larger than is found in the gibbon. Like other corvids, such as Ravens and Crows, their total brain to body ratio is equal to that of great apes and cetaceans, and only slightly lower than in humans

Thanks to you, Satyen

Lovely spotting and great information! Thanks for sharing!