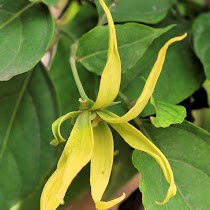 Plant sources Plants have long been used in perfumery as a source of essential oils and aroma compounds. These aromatics are usually secondary metabolites produced by plants as protection against herbivores, infections, as well as to attract pollinators. Plants are by far the largest source of fragrant compounds used in perfumery. The sources of these compounds may be derived from various parts of a plant. A plant can offer more than one source of aromatics, for instance the aerial portions and seeds of coriander have remarkably different odors from each other. Orange leaves, blossoms, and fruit zest are the respective sources of petitgrain, neroli, and orange oils. Bark: Commonly used barks includes cinnamon and cascarilla. The fragrant oil in sassafras root bark is also used either directly or purified for its main constituent, safrole, which is used in the synthesis of other fragrant compounds. Flowers and blossoms: Undoubtedly the largest and most common source of perfume aromatics. Includes the flowers of several species of rose and jasmine, as well as osmanthus, plumeria, mimosa, tuberose, narcissus, scented geranium, cassie, ambrette as well as the blossoms of citrus and ylang-ylang trees. Although not traditionally thought of as a flower, the unopened flower buds of the clove are also commonly used. Most orchid flowers are not commercially used to produce essential oils or absolutes, except in the case of vanilla, an orchid, which must be pollinated first and made into seed pods before use in perfumery. Fruits: Fresh fruits such as apples, strawberries, cherries unfortunately do not yield the expected odors when extracted; if such fragrance notes are found in a perfume, they are synthetic. Notable exceptions include litsea cubeba, vanilla, and juniper berry. The most commonly used fruits yield their aromatics from the rind; they include citrus such as oranges, lemons, and limes. Although grapefruit rind is still used for aromatics, more and more commercially used grapefruit aromatics are artificially synthesized since the natural aromatic contains sulfur and its degradation product is quite unpleasant in smell. Leaves and twigs: Commonly used for perfumery are lavender leaf, patchouli, sage, violets, rosemary, and citrus leaves. Sometimes leaves are valued for the "green" smell they bring to perfumes, examples of this include hay and tomato leaf. Resins: Valued since antiquity, resins have been widely used in incense and perfumery. Highly fragrant and antiseptic resins and resin-containing perfumes have been used by many cultures as medicines for a large variety of ailments. Commonly used resins in perfumery include labdanum, frankincense/olibanum, myrrh, Peru balsam, gum benzoin. Pine and fir resins are a particularly valued source of terpenes used in the organic synthesis of many other synthetic or naturally occurring aromatic compounds. Some of what is called amber and copal in perfumery today is the resinous secretion of fossil conifers. Roots, rhizomes and bulbs: Commonly used terrestrial portions in perfumery include iris rhizomes, vetiver roots, various rhizomes of the ginger family. Seeds: Commonly used seeds include tonka bean, carrot seed, coriander, caraway, cocoa, nutmeg, mace, cardamom, and anise. Woods: Highly important in providing the base notes to a perfume, wood oils and distillates are indispensable in perfumery. Commonly used woods include sandalwood, rosewood, agarwood, birch, cedar, juniper, and pine. These are used in the form of macerations or dry-distilled (rectified) forms.