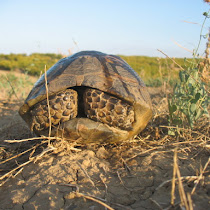 Let's gather together a superb collection of the Caucasus! Sign in to join mission

The Caucasus is an area of great ecological importance. The region is included in the list of 34 world Biodiversity hotspots. It harbors some 6400 species of higher plants, 1600 of which are endemic to the region. Its wildlife includes leopards, brown bears, wolves, bison, marals, golden eagles and Hooded Crows. Among invertebrates, some 1000 spider species are recorded in the Caucasus. The region has a high level of endemism and a number of relict animals and plants, the fact reflecting presence of refugial forests, which survived the Ice Age in the Caucasus Mountains. The Caucasus forest refugium is the largest throughout the Western Asian / near Eastern region The area has multiple representatives of disjunct relict groups of plants with the closest relatives in Eastern Asia, southern Europe, and even North America. Over 70 species of forest snails of the region are endemic. Some relict species of vertebrates are Caucasian parsley frog, Caucasian Salamander, Robert's Snow Vole, Caucasian Grouse, and they are almost entirely endemic groups of animals such as lizards of genus Darevskia. In general, species composition of this refugium is quite distinct and differs from that of the other Western Eurasian refugia. The natural landscape is one of mixed forest, with substantial areas of rocky ground above the treeline.