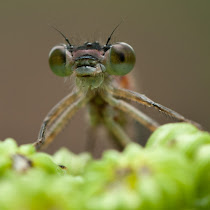 The Insecta (insects) are a Class of the large animal Phylum called ARTHROPODA (arthropods) - a name that refers to the jointed limbs. The other major Classes of living arthropods (i.e. animals related to insects) include the Crustacea (crabs, lobsters, shrimps, barnacles, woodlice, etc.), the Myriapoda (millipedes, centipedes, etc.) and the Arachnida (scorpions, king crabs, spiders, mites, ticks, etc.). In addition there are several minor Classes, the Onychophora (velvet worms), Tardigrada (water bears), Pentastomida (tongue worms) and Pycnogonida (sea spiders), all of which contain somewhat aberrant living forms of uncertain affinities to the any of the preceding groups, and finally a Class of extinct arthropods, the Trilobita (trilobites), known only from their fossil remains. All these animals are characterised by a tough outer body-shell or exoskeleton, with flexible joints between the skeletal plates to allow the animal to move. The aim of the survey is to observe and document, Arthropod activity in United Kingdom and Ireland Sign in to join mission

Upload your snaps of Arthropods, share pictures of your native insects. update us on their habitual and environmental changes.