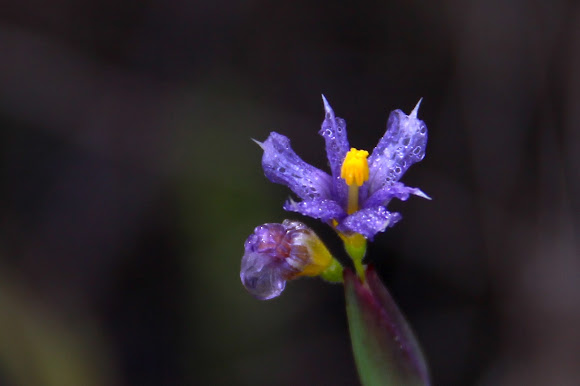 Gorgeous, purple flower with spikes at the ends of each petal. The pistol is yellow. The flower was less than 2.5 cm across. The leaves are long, slender and arching. "The stems of Sisyrinchium bellum can grow as long as 60 centimetres (24 in), though they are often shorter. Its leaves are grassy and tufted. The flowers are 1–2 centimetres (0.39–0.79 in) in diameter and purplish-blue, varying somewhat in color from a true blue to a definite purple; occasional white-flowering plants are found." - Wikipedia

Grassy area along trail at Daley Ranch. This is native to California. It's found "in open places where there is some moisture, particularly grassy areas, though it can also be found in woodlands and at altitudes up to 2,400 metres (7,900 ft)." - Wikipedia

Despite its name, it is not a grass but rather, an Iris. "The Ohlone used an infusion of the roots and leaves as a cure for indigestion and stomach pain, and similar uses are recorded from other Native American peoples." - Wikipedia