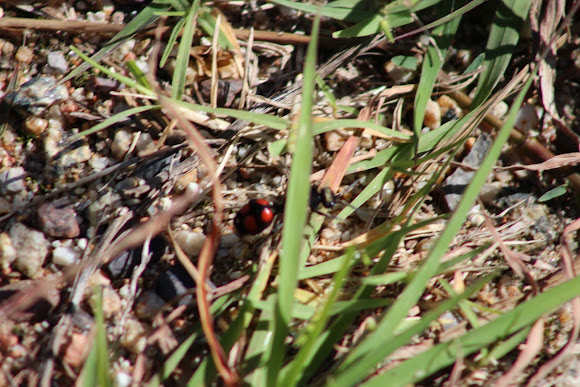 Stated in wikipedia: "Mutillidae are a family of more than 3,000 species of wasp whose wingless females resemble ants. Their common name velvet ant refers to their dense pile of hair which most often is bright scarlet or orange but may also be black, white, silver, or gold. Their bright colours serve as aposematic signals. They are known for their extremely painful sting, facetiously said to be strong enough to kill a cow, hence the common name cow killer or cow ant is applied to some species. Unlike a real ant, they do not have drones, workers, and queens. However, velvet ants do exhibit haplodiploid sex determination similar to other members of Vespoidea (JH Hunt 1999)."

This one was seen at the Laguna del Sauce, Uruguay. Glad it didn´t stink us...=).

My first impression (before the ID suggestion): "This black ant with big red spots on it was rushing - by itself and with no food - between leaves at the shore of the Laguna del Sauce. I had never seen one like this before and don´t know its id; thanks for the help in advance."

Thank you very much oxyjack! It did seemed capable of harming with those bright colours... Good to know it is an ant-like wasp, I had checked it in the net and found ant-like spiders but the body and number of legs didn´t seem adquate.., this does.

Nice spotting! This is not an ant, but an ant-like wasp called a Mutillid. The females are wingless and the males are winged. Don't pick up the wingless ones because they have a painful sting.