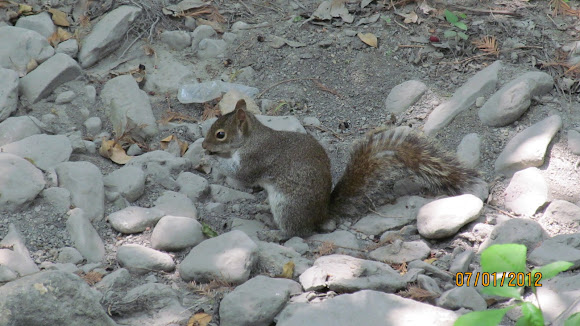 Mexican gray squirrel (or Red-bellied squirrel) (Sciurus aureogaster) is a tree squirrel in the genus Sciurus endemic to Guatemala and in eastern and southern Mexico, and is an introduced species in the Florida Keys.

Very interesting! It would be great if you could document others in that park or any others in the area that you visit. I will be contacting my advisor to see how to proceed with a publication, and keep you updated. Thanks again for the response. Very cool find!

Yes, Geoffrey. Actually, this guys are quite abundant in this region, but, i am aware of noticing an increase in sightings of them, just like black bears (ursus americanus), if you are also interested . The location is 100% accurate. And, yes, comparing the photo with other ones on the net, i think it fits as to an eastern gray squirrel. Thank you very much. I'll gladly help you however i can. I'll see if i can get some more photos of these guys on the ongoing week, i'll mark the spots on a map and get sure to send them to you. Good luck with your population analysis.

Squirrels are so fuzzy

Hello Alan, great photo! This actually looks like an eastern gray squirrel based on the color pattern. If that is true, and the location information is correct, this would be a range extension for this species into Mexico. Could you confirm that the location you marked on the map is correct? I am a wildlife biologist, and actually study squirrels, particularly introduced, non-native squirrels, so this is of particular interest to me. I see from your profile that you are a biology student, and I would be interested in asking you to join me in publishing this information as a scientific note if it does turn out to really be a range extension.

Lovely spot! You might like to add this to the Project Squirrel mission http://www.projectnoah.org/missions/3600... You can check out all the Global missions & local ones for your area by clicking on the Missions tab at the top of the page.
Welcome to the Community Alan!