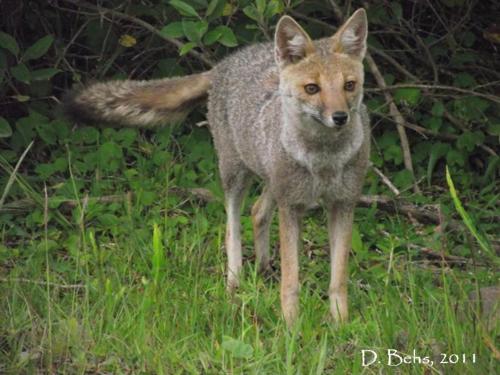 Is a medium-sized fox which has a brindled grey back with paler grey underparts. The head, neck and large ears are reddish, as are the outsides of the legs. In Brazil, where the species enjoys complete protection, there is no market for fur. Pampas foxes are protected in Paraguay and Uruguay, but controlled hunting continues in these two countries. (Boccaceci, 1998) IUCN Red List: Least Concern US Federal List: No special status

The Pampas Fox inhabits the Southern Cone of South America, occupying chiefly the Chaco, Argentine Monte, and Pampas eco-regions. From eastern Bolivia, western Paraguay and east of Salta, Catamarca, San Juan, La Rioja and Mendoza provinces in Argentina, to the Atlantic coast; and from south-eastern Brazil to the Río Negro Province, Argentina, in the south. Information on the limits of its distribution and the extent to which it overlaps with congeneric species is uncertain. These foxes are found in the pampas grasslands, hills, heath, ridges and deserts. They prefer plains and fields with tall grass, sierras, and small narrow wood areas along streams and occasionally forest areas. (Brooks, 1992) Habitat Regions: Temperate; Tropical Terrestrial Biomes: Desert or dune; Forest

Picture taken at Aparados da Serra National Park, in Cambará do Sul - Santa Catarina, South of Brazil. Why this picture was taken so close to the graxaim? Because humans feed these wild dogs along the road. You just have to stop your car, and then they come looking for some food. Is this a good thing? Of course not. The vet of the park told me that some weeks ago, one graxaim was found dead, and the reason of it was starvation. Another fact that has occurred in the same region last year, a dozen dogs were found dead along the road. They were poisoned by someone who threw a few bananas with a deadly poison. These facts make me think about the efficience of the National Park. They have an area with a unique natural beauty, with some projects inside the park, but nothing with Environmental Education with the communities around the park. That is something really bad. If the people around can’t understand the importance of that place for them or future generations, the reason for the existence of the park is meaningless.

Your observations about the need for education on conservation and preservation of species are well-taken!

Great photo, I've only seen a fox twice before and I think that it was the same one or in the same family because I saw one in my neighborhood on two separate occasions, I think it was a common red fox? If there is such a thing haha