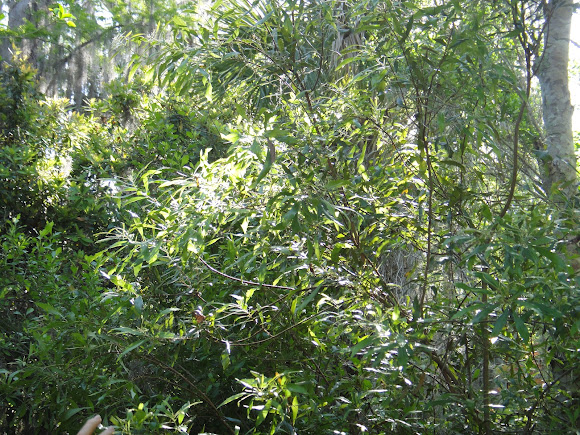 also known as sweet bay, bay tree, true laurel, Grecian laurel, laurel tree, or simply laurel, is an aromatic evergreen tree or large shrub with green, glossy leaves, native to the Mediterranean region. It is the source of the bay leaf used in cooking. Under the simpler name "laurel," Laurus nobilis figures prominently in classical Greek, Roman, and Biblical culture. Worldwide, many other kinds of plants in diverse families are also called "bay" or "laurel," generally due to similarity of foliage or aroma to Laurus nobilis, and the full name is used for the California bay laurel (Umbellularia), also in the family Lauraceae.

Laurus nobilis and Ilex aquifolium are widespread relics of the laurisilva forests that originally covered much of the Mediterranean Basin when the climate of the region was more humid. With the drying of the Mediterranean during the Pliocene era, the laurel forests gradually retreated, and were replaced by the more drought-tolerant sclerophyll plant communities familiar today. Most of the last remaining laurisilva forests around the Mediterranean are believed to have disappeared approximately ten thousand years ago at the end of the Pleistocene era, when the Mediterranean Basin became drier and with a harsher climate, although some remnants of the laurel forest flora still persist in the mountains of southern Turkey, northern Syria, southern Spain, north-central Portugal and northern Morocco. Indigenous laurisilva forest also persists in Madeira near the North Atlantic Ocean, which has moderated these climatic fluctuations. The ecological requirements of the species, are those of the laurel forest and like most of their counterparts laurifolia in the world, it is vigorous species with a great ability to populate the habitat that is conducive. Laurus nobilis responded to favourable climatic periods and expanded across the available habitat. Laurus nobilis occur as opportunistic species across wide distribution with close relatives and few species, indicating the recent divergence of this species. The extant laurel species of this group are relatively young.

Aqueous extracts of bay laurel can also be used as astringents and even as a reasonable salve for open wounds.[3] In massage therapy, the essential oil of bay laurel is reputed to alleviate arthritis and rheumatism, while in aromatherapy, it is used to treat earaches and high blood pressure.[4][unreliable source?] A traditional folk remedy for rashes caused by poison ivy, poison oak, and stinging nettle is a poultice soaked in boiled bay leaves.[5]