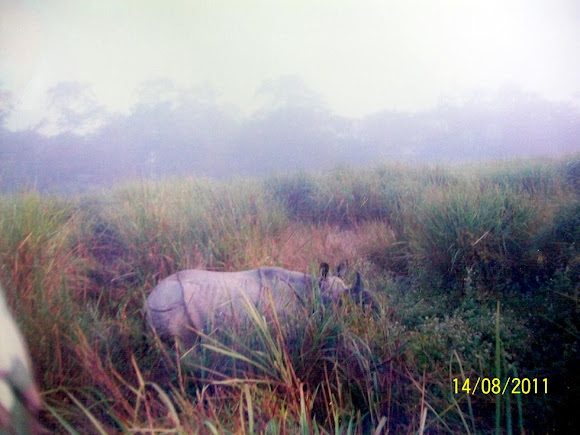 The Indian rhinoceros or the greater one-horned rhinoceros (Rhinoceros unicornis) is now found almost exclusively in Nepal and North-Eastern India. The rhino once inhabited many areas of Pakistan to Burma and may have even roamed in China. But because of human influence their range has shrunk and now they only exist in several protected areas of India (in Assam, West Bengal, Gujarat and a few pairs in Uttar Pradesh) and Nepal, plus a few pairs in Lal Suhanra National Park in Pakistan. It is confined to the tall grasslands and forests in the foothills of the Himalayas. The Indian rhinoceros has thick, silver-brown skin which creates huge folds all over its body. Its upper legs and shoulders are covered in wart-like bumps, and it has very little body hair. Fully grown males are larger than females in the wild, weighing from 2,500–3,200 kg (5,500–7,100 lb).The Indian rhino stands at 1.75–2.0 metres (5.75–6.5 ft). Female Indian rhinos weigh about 1,900 kg and are 3–4 metres long. The record-sized specimen of this rhino was approximately 3,800 kg. The Indian rhino has a single horn that reaches a length of between 20 and 100 cm. Its size is comparable to that of the white rhino in Africa. Two-thirds of the world's Indian rhinoceroses are now confined to the Kaziranga National Park situated in the Golaghat district of Assam, India.

In Kaziranga National Park, which in is situated in the next district to my hometown Jorhat, I captured in in 1998, when I was in class four with my reel camera.Then I captured the printed photo with my digital camera a few days ago..Just remembering the elephant ride i thought why should i dnt share it here..Rhino is our pride.

Special spot Sudarshana, you may add it to the Rhino mission if you like, to help raise awareness of their plight : http://www.projectnoah.org/missions/1284...