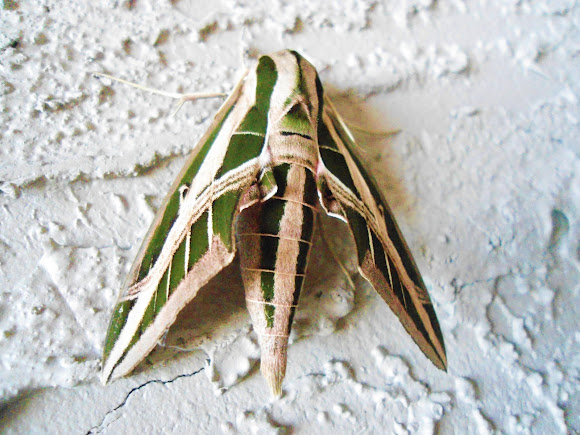 Antennae are generally not very feathery, even in the males.They lack tympanal organs but members of the tribe Choerocampini have hearing organs on their heads.They have a frenulum and retinaculum to join hindwings and forewings. The thorax, abdomen, and wings are densely covered in scales. Sphingids may have a reduced proboscis, but most have a very long proboscis.They use it to feed on nectar from flowers. Most are crepuscular or nocturnal, but some species fly during the day. Both males and females are relatively long-lived (living 10 to 30 days). Prior to flight, most species shiver their flight muscles to warm them up, and, during flight, body temperatures may surpass 40°C In some species, sexual dimorphism (differences in form between the sexes) is quite marked. For example, in the African species Herse convolvuli (the Convolvulus or Morning Glory Hawk Moth), the antennae are thicker and wing markings more mottled in the male than in the female. Only males have both an undivided frenular hook and a retinaculum. Also all male hawk moths have a partial comb of hairs along their antennae. Females call males to them with pheromones. The male may douse the female with a pheromone before mating

The Banded Sphinx Moth (Eumorpha fasciatus) is a moth of the Sphingidae family. It is found from northern Argentina, Bolivia, Paraguay, Uruguay, Brazil, Colombia, Ecuador and Peru, north through Central America (Mexico, Belize, Guatemala, Honduras, Nicaragua, Costa Rica and Panama) to southern California and southern Arizona, east to Texas, Mississippi, Florida and South Carolina. Strays can be found north up to Missouri, Michigan, Indiana, Pennsylvania, New Jersey, New York and Nova Scotia. It is also found in the Caribbean

Sphingids are some of the fastest flying insects, some are capable of flying at over 50 km/h (30 miles per hour).

Sphinx ligustri is a European species and not found in US. This one is Eumorpha fasciatus.