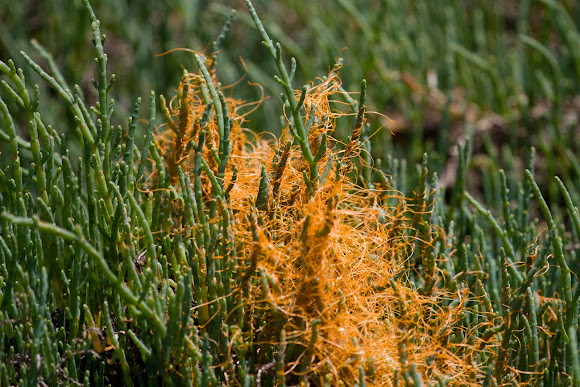 Dodder is a parasitic vine which climbs other plants and takes nutrition directly from them via a haustorium. The dodder resembles a pile of yellow-orange straw wrapped tightly around its host plant. It is mostly stem; the leaves are reduced to scales on the stem's surface, since they are not needed for photosynthesis while the dodder is obtaining nutrients from its host. It bears tiny white flowers which are only about 3 millimeters wide, and fruits which are even smaller.

Cuscuta salina is a species of dodder known by the common name salt marsh dodder. It is native to western North America, where it lives in seasonal alkaline or saline habitats such as vernal pools and salt flats. It is a parasitic plant, wrapping itself around wetland vegetation and tapping them for nutrients with its haustoria. This is a slender annual vine extending yellowish thready stems to wrap tightly around other plants. The leaves are rudimentary and scale-like. The dodder produces flowers with white glandular corollas. Each is bell-shaped with five pointed triangular lobes.