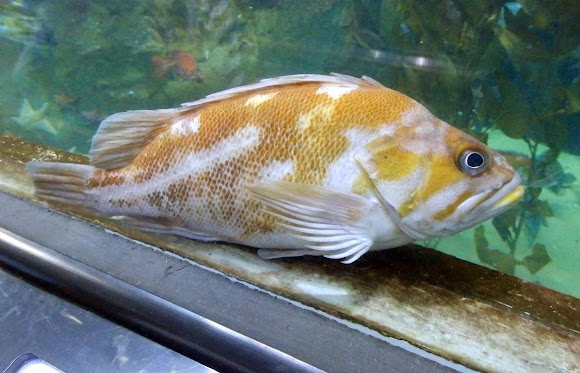 Copper rockfish are known to be highly variable in coloration, ranging from a dark reddish brown, with pale copper blotching along the sides, to a lighter pinkish brown with a yellowish white mottling on the flanks. Copper Rockfish are known for the table quality of their flesh.

It is a relatively common rockfish of the Pacific coast. It is very widespread in its distribution, known from the very northern reaches of the Gulf of Alaska, to the Pacific side of the Baja California peninsula, north of Guerrero Negro. The copper rockfish is also very widely distributed in depth, from the subtidal shallows of about 10 to 183 m. The adult copper rockfish is found very close to the bottom often touching. They are almost always associated in and around rocks, and almost never on sand. This rockfish is known to be very faithful to its chosen home and numerous tagging studies have shown that these rockfish travel no more than a mile from their chosen location. Aquarium of the Bay, SF-