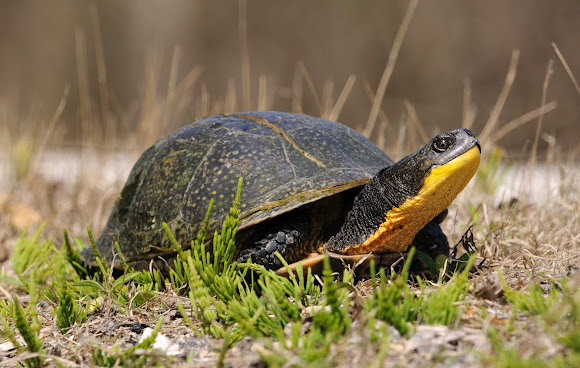 The Blanding's Turtle is a medium sized turtle with a carapace of about 10 inches. The carapace (upper shell) is domed and speckled with yellow spots. One of the distinguishing marks is the bright yellow chin and throat. The lower shell is hinged allowing the lower part to fold upward and meet with the carapace to better protect the head and neck from injury.

The Blanding's Turtle are semi-aquatic turtles living in wetland and sand dune complexes, in which it lays its eggs. Its range includes much of the US Midwest and eastern Canada.

This photo was made, after I stopped the car to move this turtle from the center of a rural road. I feared that it would not live to see the next day had I not moved it to safety. The photo was taken after it was moved to the side of the road it was attempting to get to.

Love those sparkling eyes... and spectacular one. Nice catch of contrast in Tortoise's colours...Great spotting.

Great photo and story to go with it.

I want a turtle. One think I certainly lack. And your photos are such enjoyment to go thru.

Thanks for the information bandhturtlesite

This is more than likely a relatively old turtle. From the picture the sex of the turtle or age cannot be determined. However, this turtle looks as though it would be large enough to be a sexually mature female. It takes female Blanding's Turtles about 14-20 years to reach sexual maturity, so this turtle has seen a few years.

Small Wonders, I do not know much about this turtle or how I would go about guessing its age. I suspect it was several years old, as it appeared it was heading to a spot to lay eggs. ( I am only speculating about this). Many other turtles were out laying eggs around the time I made this spotting. This was the only blanding's I saw. I did see many snapping turtles depositing their eggs in the soft dirt or sand. Because this was located on a road with private property on both sides, I was not able to check out where it was headed.

Great, rare spotting! Is it a young turtle? We need the young ones!

It is in many States, thanks for looking, and thanks for the comment bandhturtlesite

Nice spotting. The Blanding's Turtle is a threatened species in my state.