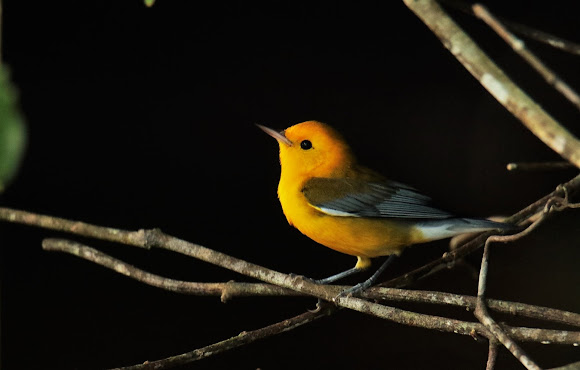 The prothonotary warbler is 13 cm long and weighs 12.5 g. It has an olive back with blue-grey wings and tail, yellow underparts, a relatively long pointed bill and black legs. The adult male has a bright orange-yellow head. Females and immature birds are not as vivid in color (they have a yellow head). In flight from below, the tail shows a distinctive two-toned pattern, white at the base and dark at the tip. It is known as the only eastern warbler that nests in cavities, sometimes using abandoned holes. In Costa Rica I always seen them foraging in dense vegetation close to water where they look for insects or their larvae.

This bird was supposedly named after certain prelates in the Roman Catholic Church known as protonotaries, But as they did not wear any yellow, I believe the name is because this is one of the first birds waking up in the morning and Protonotarie makes referece of the first of the notaries, So more birds in the warblers should be known as protonNOTARIES , Just thinking.

Thanks a lot.... always a pleasure to share my spottings. So I a glad you all enjoy them.

Congratulations Jonathan, this striking little bird is our Spotting of the Day!

"We love the vibrant yellow-orange color on this male Prothonotary Warbler (Protonotaria citrea), our Spotting of the Day! The prothonotary warbler is native to the United States, Central America and parts of northern South America, and is the only presentative of the genus Protonotaria. Protonotaria belongs to the New World warblers or wood-warblers family (Parulidae). These passerine birds are often colorful, and are not directly related to Old World Warblers (Sylviidae) or Australian warblers (Acanthizidae)".

Thanks Antonio, always a pleasure.

Beautiful series Jonathan,congrats and thanks for sharing