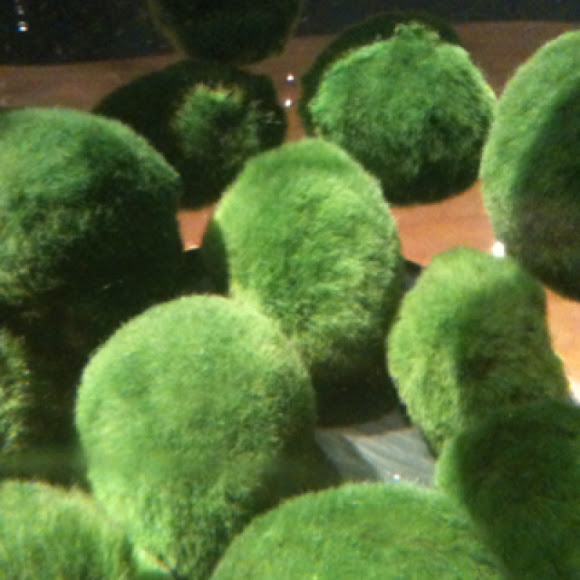 Those who have not heard of Marimo (like me lol) would probably wonder what it is. Commonly known as Marimo in Korea, its technical term is Cladophora aegagropila, also called "Tribbles" or "Algae Balls" in the West. Marimo is the name given to a type of land locked algae formed by many small strings of algae tangled together in a radial pattern forming a fuzzy green ball. Mari comes from the Japanese word for ball and mo refers to algae. As its life span is quite long - the biggest Marimo ball is known to have lived over 100 years. Breeding the algae balls in right condition, one can hand over a couple of generations from grandparents to a grandson, working as a medium of family love.

Originated from Lake Akan in Japan, it is considered as national treasure declared as a natural monument. In its natural habitat; their ability to move around by using the undercurrents also rise to the surface in the morning and sink at night due to receive plenty of light to carry out photosynthesis is an interesting character of Moss Ball. Although these balls have been observed to grow to some degree growing in freshwater lakes and ponds in European countries and some other lakes in Japan; only in this particular lake they grow to be a noticeable size in perfect spherical shape.

Above all, the main reason for it gaining public favor would probably be due to the legend; once there lived a daughter of the chief of a tribe around Lake Akan. She fell in love with a commoner, but confronted opposition of her parents. She ran away with him and sublimated into Marimo. For that myth, in Japan, it has become spotlighted as "love plant," which realizes true love and accomplishes one's heart's desire when it is given and taken as a present. It has crossed the ocean to reach Korea, welcomed by children, lovers and parents. This plant does NOT cause algae problem. Live Plants is a natural biological filter to remove ammonia in aquarium. Propagate by dividing into smaller pieces, which become spherical over time. Negligible maintenance required. No carbon dioxide injection required for healthy growth.

The balls are made up of small strings of algae which gives them a grassy or "fuzzy" appearance :)

Those look fuzzy, why is that?

That sounds amazing...like an aquatic zen garden. No fish needed lol. This is definitely on my to do list XD

Leah, I have seen aquariums with a great many of these in them. I only keep the four as accent pieces to the other live plants I keep, I also use black substrate so they really stand out!

The most I have seen in an aquarium were 20, the tank was a 125 gallon, with no substrate, it did have various rock formations as well as several variety of potted sword plants. The person had two power heads attached at the bottom of the tank for circulation and the moss balls would get blown around from one side to the other. It was very captivating to say the least!

I want an aquarium now just so I can have a few of these moss balls in it. I love how healthy they make aquariums look. Is there a limit per gallon that you know of?

Great Facts Leah! I can attest to the longevity as well as the little to no maintenance needed to keep these in an aquarium. I have four, that I have had for the last 6 years. :-) You may need to give them a light shake during regular tank cleanings just to clear off any detritus that might have gathered on them, but other than that, they are maintenance free.

Awesome....thanks so much to everyone for their thoughts and opinions on this spotting. I think we finally figured it out now XD

I agree ArgyBee, I believe we may need to let this one simmer for awhile before bringing to a rolling boil. I have lots of links to the Marimo I can post if needed though. I do tons of research on plants/animals/algae as I keep several aquariums. ranging from 10gallon to 125 gallon. (all fresh water, although I have kept salt water and even brackish water tanks in the past).

That's where I first went to Brandon but nobody seemed to like it... maybe we'll let it sink in for a while... 8>/

are we sure these aren't Aegagropila linnaei? Or more commonly referred to as Marimo Moss Balls? I keep several of these in my 55 gallon fresh water tank, and they were ordered from a very reputable dealer. ;-)

Hello. I corrected the species name as per Ava's advice and I separated your tags with commas. Perhaps you can add in about the explorirorium under habitat/description. Thanks

Yes these we're on display at the San Francisco Exploritorium. I tried to find some info on them but I didn't see any :(. Figured I could figure it out when I got home but it proved to be more puzzling than I though lol

So the actual species of moss they are using is still interesting. It might be better to use 'Leucobryum glaucum'. This seems to be an alternative and the name more often used. Good one.

very interesting Leah. thanks for sharing this ! are these being grown for display purposes??

You know they really do look like Cladophora balls also known as Japaneses Moss Balls. I guess they could have been in super clean and clear water. I might have to change the names.

Ok Leah.. don't bother with the Cladophora then. (It is an algae which grows naturally into balls in a few cold water lakes in the northern hemisphere) These are artificially created. Very clever and attractive.

The moss is growing on rocks about 2-3 inches long and were kept under glass to constantly keep the air humid...or cold I guess. I have never heard of Cladophora balls I will have to check that out :)

Hi Leah, are these in water? Are they like Cladophora balls which grow in cold places?

It's viride. Here's a link with picture on page 7. http://na.fs.fed.us/stewardship/pubs/bio...
Perhaps you could add this to your spotting under "reference."