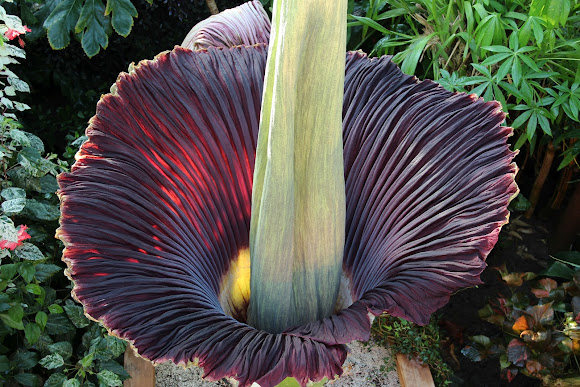 The second Titan Arum to bloom at the Floral Showhouse. It reached 85" (2.15m) in height. The flower opened up in the middle of the night and was at its peak when I saw it before work at 7am. Though the flower was about 10" shorter than the first bloom on May 6, the spathe, which looks like a large petal, was much larger and overall the flower had a nicer shape.

I wanted to post this Titan Arum because I was able to catch it at its best, unlike my other spotting where I missed the peak. Also because I was able to use a ladder to get some different perspectives on the flower. When I opened the door to the back of Floral Showhouse on tuesday morning just before work at 7am, I was hit with a huge stench from this plant and I knew it had opened. I didn't have my camera with me so I called my boss and asked if I could go back home to get it. I didn't care if I had to lose some pay, I had to get photos. Thankfully my boss said it was okay and I went right home and got my camera. I came back and set up with my tripod and get some shots from a ladder. Luckily for me, the Floral Showhouse couldn't get a professional photographer to come in so I was able to spend the entire day photographing the flower and talking to visitors about it. It was the best day at work ever! The flower didn't last long again and at exactly 10.20am, the tip of the flower bent over. I watched it go. I showed many visitors that came in after that time the photos on my camera so they could see what it looked like. By 3.30pm, it had collapsed more and the petals were starting to wilt. It was amazing to be able to spend the entire day with it. The smell was strong all day too! Especially when I went up 10' (3m) on the ladder, since the smell is released from the top of the spadex.

Thanks bhargav and Cammie.

Thanks Mayra, it sure is!

Oh yeah, the corpse lily does not smell good but definitely worth it! Thanks for the great comments.

Ewww way to take one for the project. Nice shots

In Indonesia this flower call ' bunga bangkai ' because the smell it is not good.

Thanks a lot everyone!

Awsome Dan! I'm so happy you got this one at its peak. These photos are just brilliant.

Awesome Dan! Your description is so grabbing I can almost smell it!

Oh, and congrats on ranger!

Thanks martin. Amorphophallus species are actually corms. I'm guessing you're joking about the small pots? They are 4' (1.3m) across! The plant grows in two different stages, the flower which you see here and then the vegetative state, which is just one large leaf, as you can see in the link. I have photos of a smaller corms leaf but this link is more what this flower's leaf will look like. The flower will completely die back and then go dormant for a few months and then the single leaf will sprout. This will grow for a season and then die back completely and then either another flower or possibly another large leaf will sprout again and the cycle continues. It is a fascinating plant, I'm so lucky that I will be able to follow it through all its stages.
http://images.google.com/imgres?q=amorph...

That's am amazing story about a spectacular plant, dandoucette. Is the plant itself feeding on soil or root stock or fungus? They are in tiny pots, can you explain what the plant is, apart from its flower?

Thanks everyone! It was definitely a treat for me and spending the whole day with it was so rewarding, despite the ever present stench!

Fantastic images Dan! What a treat for you, and us on PN!

Fabulous! (Dan can you identify this one specificaly? http://www.projectnoah.org/spottings/111...).

Nicely documented and great that you could spend the day like that!

and 43 other people favorited this spotting