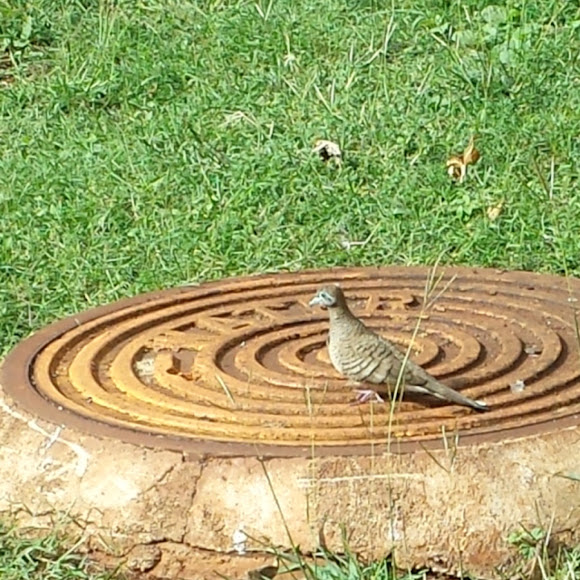 A slender, long-tailed dove measuring 21 cm. The forehead, face and throat are a pale, bluish grey; the top of the head and nape are grey-brown. The hind neck is finely barred in white-brown and black; the sides of the neck, breast and flanks are barred black. The center of the breast is mauve pink becoming white on the belly and under-tail coverts, the upper-parts are light brown becoming grey on the wing-coverts with a black edging to the feathers giving a barred effect. The secondary and primary feathers are a dark, greyish brown with some chestnut on the basal parts of the inner webs forming an obscure patch on the underside of the wing. The under-wing coverts are pale rufous barred with black. The central tail feathers are of equal length but the three outer pairs are progressively shortened, graduating the tail when spread. These feathers are grey while the outer pairs are blackish with prominent white tips. The orbital skin is blue sometimes having a greenish or grayish tinge; the bill is grey or grey-brown at the tip and a bluish or greenish grey at the base. The feet and legs are a dull pink. Both sexes are the same; juveniles are paler and browner than the adults and have barred feathers on the back and buff fringes on the wing-coverts.

The Zebra Dove (Geopelia striata) also known as Barred Ground Dove, is a bird of the dove family Columbidae, native to South-east Asia. They are small birds with a long tail. They are predominantly brownish-grey in color with black-and-white barring.

A common bird in hawaii

Welcome to Project Noah, Paul Park,
I hope you like the site as much we do; there are many features you can explore:
I invite you to go to http://www.projectnoah.org/faq where you will find the purpose and “rules” of Project Noah.
There is a blog http://blog.projectnoah.org/ where we post articles from spotters with special insight into different organisms.
There are also the chats for help with identification, and to comment on your own and others’ spottings.
Look at the global and local missions to put your spottings into:http://www.projectnoah.org/missions
Enjoy yourself here, see you around!