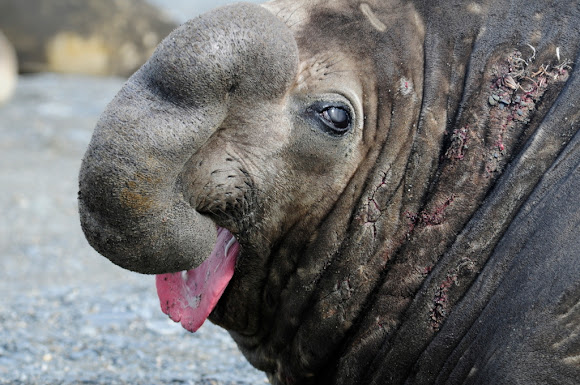 "The southern elephant seal (Mirounga leonina) is one of the two extant species of elephant seal. It is both the largest pinniped and member of the order Carnivora living today. The seal gets its name from its great size and the large proboscis of the adult males, which is used to make extraordinarily loud roaring noises, especially during the mating season."

"The world population was estimated at 650,000 animals in the mid-1990s,[1] and was estimated in 2005 at between 664,000 and 740,000 animals.[7] Studies have shown the existence of three geographic subpopulations, one in each of the three oceans. Tracking studies have indicated the routes traveled by elephant seals, demonstrating that their main feeding area is at the edge of the Antarctic continent. While elephant seals may come ashore in Antarctica occasionally to rest or to mate, they gather to breed in subantarctic locations."

"Elephant seals are among the seals that can stay on land for the longest periods of time, as they can stay dry for several consecutive weeks each year. Males arrive in the colonies earlier than the females and fight for control of harems when they arrive."

Fun fact! The Southern elephant seal is the world's largest carnivore. A large adult male can measure over 20 feet in length and tip the scales at a massive 5.5 tons! Females of the species are much smaller, typically weighing in at less than 25% of the males' weight.

Congratulations Cyrill, this spotting was also selected by National Geographic as their Spotting of the Week!

Congratulations! Nice series and your spottings and pictures are beautiful; thank you for sharing them =)

Congrats Cyrill on your SOTD award.

HaHa! I love the one with his tongue hanging out!

Congrats Cyril on your SOTD award.

Congratulations Cyril! I love learning about how fascinating creatures like this one get their common name. This is a great contribution to Project Noah!

Congrats Cyrill, these great close-ups have earned you a Spotting of the Day! We especially loved the 4th pick. We hope to see more great photos from you.

Fabulous series Cyrill!
You look like you have some amazing adventures! Would you mind sharing some of the circumstances of your spottings in the notes - I know the community would be really interested to know more!