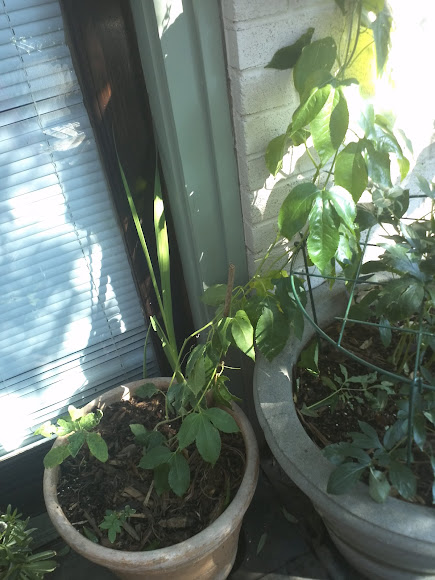 Passiflora, known also as the passion flowers or passion vines, is a genus of about 500 species of flowering plants, the namesakes of the family Passifloraceae. They are mostly vines, with some being shrubs, and a few species being herbaceous. For information about the fruit of the passiflora plant, see passionfruit. The monotypic genus Hollrungia seems to be inseparable from Passiflora, but further study is needed.

The family Passifloraceae is found worldwide, except Antarctica. Passiflora is also absent from Africa, where many other members of the family Passifloraceae occur (e.g. the more plesiomorphic Adenia). Nine species of Passiflora are native to the USA, found from Ohio to the north, west to California and south to the Florida Keys. Most other species are found in South America, China, and Southern Asia, New Guinea, four or more species in Australia and a single endemic species in New Zealand. New species continue to be identified: for example, P. pardifolia and P. xishuangbannaensis have only been known to the scientific community since 2006 and 2005, respectively. Some species of Passiflora have been naturalised beyond their native ranges. For example, Blue Passion Flower (P. caerulea) now grows wild in Spain.[1] The purple passionfruit (P. edulis) and its yellow relative flavicarpa have been introduced in many tropical regions as commercial crops.

Hundreds of hybrids have been named; hybridizing is currently being done extensively for flowers, foliage and fruit. A number of species of Passiflora are cultivated outside their natural range because of their beautiful flowers. During the Victorian era the flower (which in all but a few species lasts only one day) was very popular, and many hybrids were created using the Winged-stem Passion Flower (P. alata) and the Blue Passion Flower (P. caerulea) and other tropical species. Many cool-growing Passiflora from the Andes Mountains can be grown successfully for their beautiful flowers and fruit in cooler Mediterranean climates, such as the Monterey Bay and San Francisco in California and along the Western Coast of the U.S. into Canada. One Blue Passion Flower or hybrid even grew to large size at Malmö Central Station in Sweden.[5] Passion flowers have been a subject of studies investigating extranuclear inheritance; paternal inheritance of chloroplast DNA has been documented in this genus.[6] The plastome of the Two-flowered Passion Flower (P. biflora) has been sequenced. The French name for this plant has lent itself to La Famille Passiflore, a highly successful children's book series by Geneviève Huriet, and an animated series based upon it. These have been translated into English as Beechwood Bunny Tales and The Bellflower Bunnies, respectively.