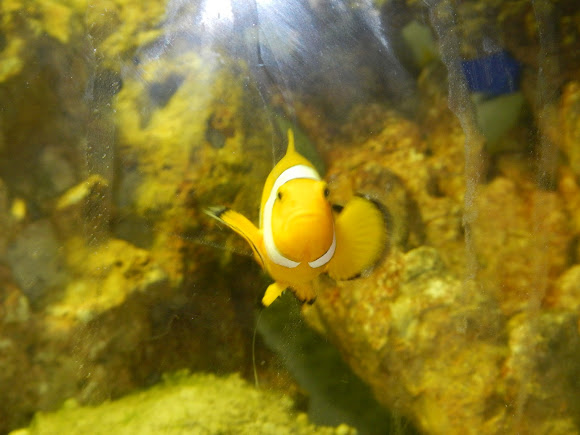 Clown fish founded in an aquarium in Sicily.This clown anemonefish can be recognised by its orange colour with three white bars and black markings on the fins. It grows to about eight centimeters (three inches) in length. One can differentiate between Percula (true) and Ocellaris (false) by their respective colors and patterns. Ocellaris are usually less vibrantly colored, and have 11 dorsal fin-spines instead of 10, as on the Percula. Also, the species have different eye arrangements: Percula have bright orange irises, making their eyes appear smaller, whereas Ocellaris have grey/orange irises which make the species eyes appear bigger.

All clownfish are well known for their habit of using an anemone as a host for protection. Although this relationship was once considered to be commensalism, now it has been discovered that clownfish will use the anemone's stinging tentacles for protection, and in turn, the clownfish's fecal matter provides nutrients for the anemone. In addition, some clownfish will feed its anemone, further proving that this symbiosis is in fact mutualism.