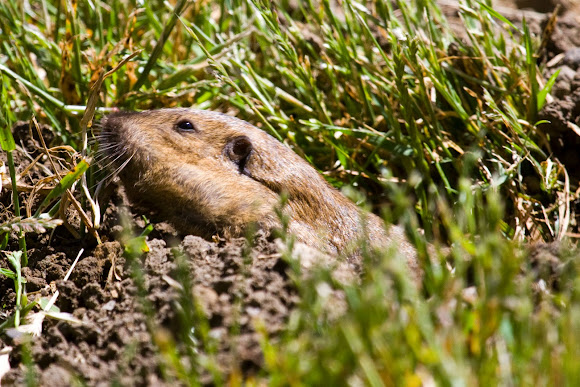 Botta's pocket gopher (Thomomys bottae) is a pocket gopher native to western North America, from California east to Texas and from southern Utah and Colorado south to Mexico. It is also known in some sources as valley pocket gopher, particularly in California. This species is medium-sized, with males reaching a length of approximately 25–26 centimetres (9.8–10 in) and a weight of 160–250 grams (5.6–8.8 oz), and females averaging about 22 centimetres (8.7 in) in length and a weight of 120–200 grams (4.2–7.1 oz). This species is highly adaptable, burrowing into a very diverse array of soils from loose sands to tightly packed clays, and from arid deserts to high altitude meadows. It is strictly herbivorous, and will often pull plants into the ground by the roots to consume them in the safety of its burrow, where it spends 90% of its life. The burrows of this species may reach lengths of more than 150 m, and only extend above ground in times of snowfall. Traces of these aboveground burrows are sometimes called "gopher eskers." Main predators of this species include American Badgers, Coyotes, Long-tailed Weasels, and Snakes, but other predators include Skunks, Owls, Bobcats, and Hawks. This species is considered a pest in urban and agricultural areas due to its burrowing habit and its predilection for alfalfa; however, it is also considered beneficial as its burrows are a key source of aeration for soils in the region.

These gophers are abundant in this location and have attracted three resident Great Blue Herons, which are feeding on them.

Thanks Cindy. They are kind of cute, as long as they aren't digging up my yard.

They're so troublesome but yet kinda cute :) Nice shot, Donna!