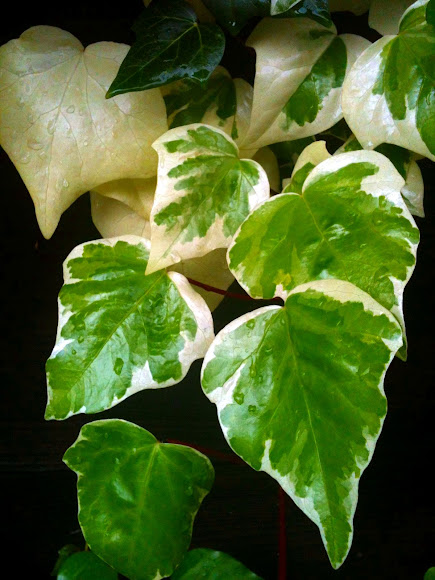 Hedera canariensis var algeriensis 'Gloire de Marengo' aka 'Variegata' is the variegated form of Algerian Ivy, or North African Ivy, or Canary Island Ivy, or Madeira Ivy. Although the species can be invasive in more southerly locations, here in the Pacific Northwest it is restrained, the variegated form the more so. This evergreen, self-clinging, vigorous climber is a popular ground cover for slopes and is often grown on walls to visually soften or add an aged look to the architecture. It climbs over rocks, tree trunks, walls and trellises, and carpets the ground. Gloire de Marengo,' or 'Souvenir of Marengo,' alludes to a city of northern Italy, though the species is native to the Canary Islands, Portugal, & North Africa. It was apparently named merely to commemorate Napoleon's conquest of that city, though who but the French would commemorate a mad dictator. It is a fine groundcover for a sunny hillside, & a good climber to hide an untidy structure or fill a large trellis. It does well not only in the garden but also makes an excellent houseplant & suits container gardening. Often used to brighten shady areas, salt tolerant. Infrequent foot traffic is tolerated. Not drought-hardy as is English Ivy, it is not the choice for a no-care garden, but fine for a nearly-no-care garden. It does great in partial shade or full sun. In deeper shade it will creep farther more quickly, looking for sunlight, whereas if it gets sufficient sun it gets very thick where planted, then thinks about colonizing the next spot over. It's not fussy as to soil conditions beyond requiring moisture; it can even adapt to boggy conditions. It establishes itself much more quickly than English ivy. Hedera helix can take two or even four years to really take off, but Algerian ivy takes off fairly soon. It does need periodic pruning at least to remove the runners that would like to spread into areas of the garden belonging to unagressive plants. The long questing vines root very slowly so when a big vine is discovered reaching far across the garden, it's very easily pulled up.

Prefers mild climates, and with opportunity to climb, to twenty feet and more. In Zone 7 and warmer, Hedera algeriensis can climb to nearly a hundred feet. Full sun to half shade, in any soil that has good drainage. Ivy typically doesn't tolerate excessive soil moisture, but 'Gloire de Marengo' is notably less concerned about wet feet. It is also, therefore, less drought-tolerant than is usual for ivy, too. Ivy is very pH-tolerant, thriving in sweet as well as acid soils.