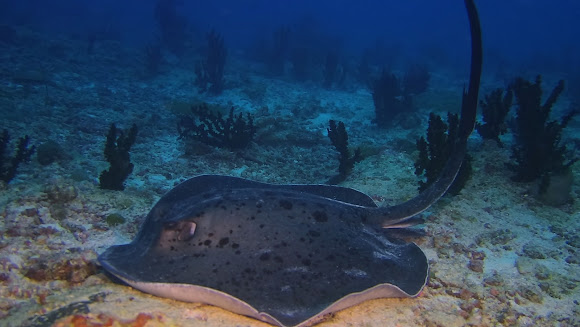 This was a very large Stingray at least 1.5 meters in circumference, found on a deep dive of 35 meters depth. It was displaying a defensive posture, with its tail up right. They have venomous barb/spine at the base of their tail which they can use to defend them self. he round ribbontail ray has a thick pectoral fin disc wider than it is long, with a smoothly rounded outer margin. The eyes are of medium size and are followed by larger spiracles. There is a short and broad curtain of skin between the oval nostrils, with a finely fringed trailing margin. The mouth is wide and curved, with faint furrows at the corners. There is a row of seven papillae on the floor, with the outermost pair smaller and set apart from the others.[7] There are 37–46 tooth rows in the upper jaw and 39–45 tooth rows in the lower jaw.[8] The teeth are small with a deep groove across the crown, and are arranged in a dense quincunx pattern into flattened surfaces. The pelvic fins are small and narrow. The tail is relatively short, not exceeding the width of the disc, and bears one (rarely two) long, serrated stinging spine on the upper surface. The base of the tail is broad; past the spine the tail rapidly thins, and bears a deep ventral fin fold that runs to the tail tip. The upper surface of the disc and tail are roughened by a uniform covering of small, widely spaced granules. There is also a midline row of sharp tubercles on the back, with two shorter rows alongside. The first of these tubercles develop at a length of around 46 cm (18 in), over the "shoulders" and in the single midline row. The dorsal coloration is light to dark gray, brown-gray, or purplish, becoming most intense towards the fin margins, with a highly variable pattern of irregular darker mottling and white speckles or streaks. The tail past the spine, including the fin fold, is uniformly black, while the underside is creamy white with darker fin margins and additional dots. Young rays are more plain in coloration than adults. One of the largest stingray species, the round ribbontail ray can grow to 1.8 m (5.9 ft) across, 3.3 m (11 ft) long, and 150 kg (330 lb) in weight.

The round ribbontail ray has a wide distribution in the Indo-Pacific region: it is found from KwaZulu-Natal in South Africa northward along the East African coast to the Red Sea, including Madagascar and the Mascarenes; from there, its range extends eastward through the Indian subcontinent to Southeast Asia and Micronesia, occurring as far north as Korea and southern Japan, and as far south as Australia, where it is found from at least Ningaloo Reef off Western Australia to Stradbroke Island off Queensland, including Lord Howe Island. In the easternmost portion of its range, it has been reported from Cocos Island and the Galápagos Islands, with individuals possibly dispersing as far as Central America. Bottom-dwelling in nature, the round ribbontail ray is typically found close to shore at a depth of 20–60 m (66–197 ft), though it has been reported anywhere from the surf zone to a depth of 439 m (1,440 ft). It favors sand or rubble bottoms in shallow lagoons or near coral and rocky reefs, and may also enter estuaries.