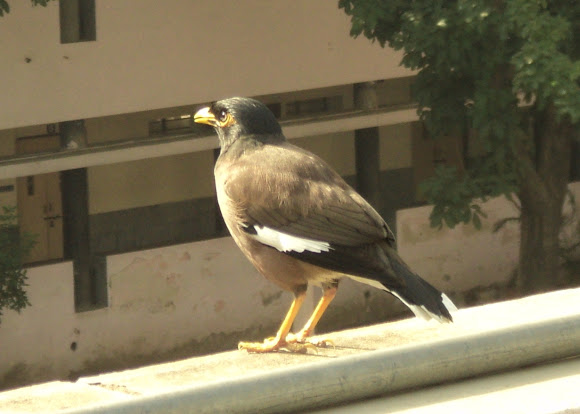 The Common Myna is readily identified by the brown body, black hooded head and the bare yellow patch behind the eye. The bill and legs are bright yellow. There is a white patch on the outer primaries and the wing lining on the underside is white. The sexes are similar and birds are usually seen in pairs. The Common Myna obeys Gloger's rule in that the birds from northwest India tend to be paler than their darker counterparts in South India. It is a species of bird native to Asia with its initial home range spanning from Iran, the entire South Asia including Pakistan, India, Nepal, Bhutan, Bangladesh and Sri Lanka; as well as Turkmenistan, Afghanistan, Kazakhstan, Myanmar, to Malaysia, peninsular Thailand, Indo-China and China.

This abundant passerine is typically found in open woodland, cultivation and around habitation.