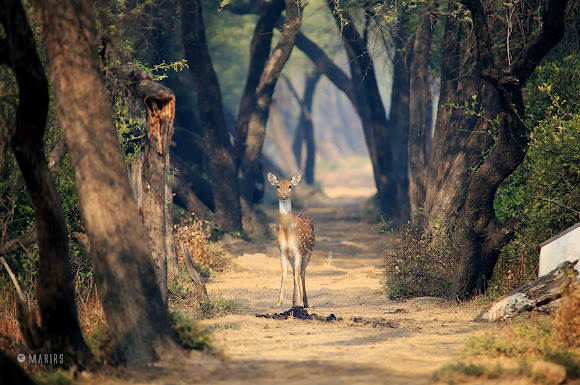 The chital or cheetal, also known as chital deer, spotted deer or axis deer, is a deer which commonly inhabits wooded regions of India, Sri Lanka, Nepal, Bangladesh, Bhutan, and in small numbers in Pakistan. The chital goes by various names in India, among which include: chital horin in Bengali, thith muwa in Sinhalese, jinke in Kannada, pulli maan in Tamil and Malayalam, jinka in Telugu, phutuki horin in Assamese, haran/harin in Marathi, and hiran in Hindi/Urdu (the latter two derived from harini, the Sanskrit cognate for 'deer'). It is the most common deer species in Indian forests. The name chital comes from the Bengali word chitral (চিত্রল)/chitra (চিত্রা), which means "spotted". The chital is monotypic within the genus Axis, but this genus has also included three species that now are placed in Hyelaphus based on genetic evidence.

Thank you all for your kind comments and for the SOTW... :)

Beautiful! The 5th photo is so nice too! Congrats marirs!

beautiful spotting and congrats on the SOTW!

Told you it was good marirs. Congrats my friend on a well deserved SOTW!

Congratulations! These gorgeous and magical photos have been selected as our Spotting of the Week by the Project Noah Rangers! Thank you so much for sharing and we can't wait to see what you photograph next. Congrats again!

Lovely, This little guy reminds me of Bambi

Like in a fairy tail movie, gorgeous marirs,super series,very good work,congrats and thanks for sharing

Oh, and email me if you are coming to India, and I can help you to go around :)

For a kid...you are growing up fast. You have a great eye and the nature around you from what you post is stunning. I would love to visit and see it myself. Keep posting. Cannot wait to see what comes next!

James, thanks for the appreciation.. :) I'll upload it to yourshot by NG and see what happens.. Thanks again so much.

To be very honest, I've done my spottings this time of the year to just make it in PN, and see how much of wildlife I've spotted so far.

Considering, all of you (James/Mark/Maria/and more) I'm just a kid here :)
Thanks for your encouragement.

That first image is one of the best I have seen on PN marirs. Could be a national geographic contender. Just takes your breath away!

I concur with Martha and Mark. #1 and 5 are stunning marirs......superb composition and imagery