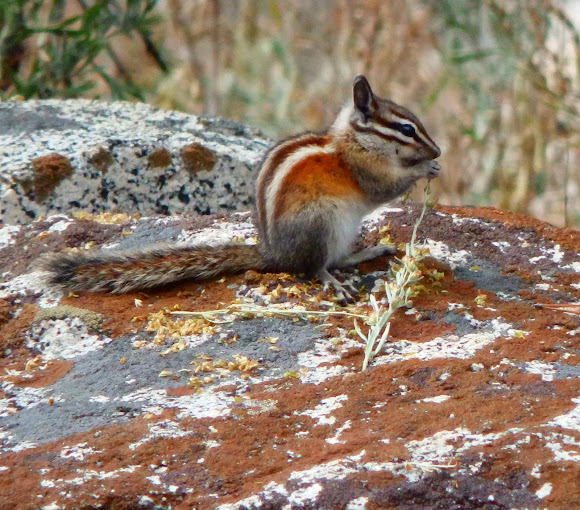 The Uinta chipmunk is a medium-sized chipmunk, with adults ranging from 20 to 24 centimetres (7.9 to 9.4 in) in length, including the 7 to 11 centimetres (2.8 to 4.3 in) tail, and weighing an average of 67 grams (2.4 oz). The predominant color of the summer coat varies from yellowish brown-grey to dark brown, often with a reddish tinge. Three wide, distinct dark blackish-brown stripes run down the back, separated and surrounded by four paler stripes of pale grey to white fur. There are also three dark and three pale stripes on each side of the face. In the winter, the coat becomes duller and more greyish, and the stripes become less distinct. The ears are black, and the underparts a very pale grey. The tail has orange and black fur, with a paler fringe of hair on the underside.

The Uinta chipmunk lives in montane and subalpine forests of the western United States, between 1,400 and 3,650 metres (4,590 and 11,980 ft) elevation. It is most common at the margins of pine and fir forests, or in clearings, often near rocky terrain or steep slopes. Seen in Soda Springs, Tuolumne Meadows, Yosemite NP, CA.

Hi Marta, I am pretty sure this isn't a lodgepole chipmunk. Reading descriptions on them, it says they have distinctive wide bands on the face, and your chipmunk does not have wide bands at all. My best bet for now is the Uinta chipmunk, back and face patterns seem to match exactly if you look on Google images. http://en.wikipedia.org/wiki/Uinta_chipm...

I think I will go for the lodgepole, since its color on the flanks was quite orange. But in any case, it is tricky for me to differentiate all this guys. I have more coming, from the Mono Lake and other areas and for the moment I don´t have a good idea of the species. Hopefully you and other people will help me :-)

Probably either a yellow pine or lodge pole chipmunk according to habitat.

I love your photography! This is such a vividly colored individual. Keep an eye out for sooty grouse at glacier point.