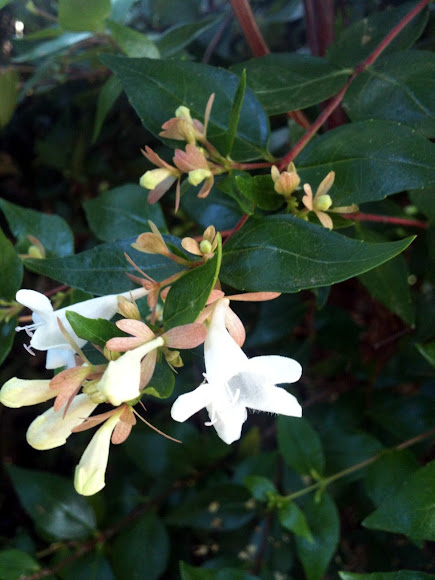 t is appropriate that glossy abelia should be such a determined bloomer because it is a reminder of the stiff-upper-lip attitude of those who initially found, lost and then finally introduced it into cultivation. Abelia is named after Clarke Abel (1780-1826) who was a surgeon and naturalist on the second unsuccessful British embassy to China in 1816. The embassy was attempting to obtain more favorable trading privileges for the English East India Company, which they finally accomplished by the Opium Wars 20 years later. Abel collected specimens and seeds of a new plant, later named Abelia chinensis in his honor, while he and the embassy were being politely but firmly ushered out of the country along the Grand Canal. On his return voyage the ship struck an uncharted reef and the party found itself shipwrecked near present day Sumatra in Indonesia. The day after the wreck they managed to retrieve some of the plant specimens only to have the small boat they were using attacked and burned by pirates. While Abel returned to England empty handed, he was fortunate enough to have left duplicate specimens of some of the material with an acquaintance in Canton. These duplicate sets were returned to him and used to establish the plant as a new member of the honeysuckle family. Abel’s Abelia was finally introduced into England as a living plant in 1844 by Robert Fortune. Some time about 1900 a gardener or nurseryman had the inspiration to cross Abelia chinensis with A. uniflora, another Chinese species, and the glossy abelia as we know it today was born. Unfortunately no record remains of who made this cross. Flowers, which first emerge in late May, will continue through fall. The 1”-long, tubular flowers can be white or a soft pink. Although flowers are most prolific in June and July, the overall flower display is not quite as dramatic as some other flowering shrubs. After each flower fades, brightly colored pink or coral sepals appear, giving the impression that more flowers have developed. It is the combination of tubular flowers and colorful sepals that creates the overall effect. Flowers are born at the tips of new growth, so flowers will be produced during the growing season as new growth develops. The small, almost tear-drop shaped glossy leaves are a dark green during the growing season. Depending on your location, your abelia may develop a rich, deep maroon winter leaf color. The further north your location, the more this plant acts as a semi-evergreen and will lose more foliage. The cascading branches will grow 5–6’ tall and wide. Most of the newer cultivars are smaller in size in the range of 3–4’ tall. You will rarely if ever have to prune glossy abelia unless you want to impose some size control. Since flowering occurs on new growth, you can be quite aggressive and still have a reasonable flower/sepal display. Disease or insect problems on glossy abelia are rare. The plant can be used in a mass or as an individual. The small leaves and arching branches give the plant a very soft, graceful textural effect.

Glossy abelia is very adaptable to sun and soil situations. It typically grows best in full sun but will grow fairly well in partial sun situations. Foliage density will decrease as the amount of shade increases. Once established, this is a fairly drought-tolerant plant.

Drought tolerant; hardy; flowers on new growth; easy to grow; can be severely pruned Too often the plant is sheared to make a clipped shrub that looks more like a toadstool than a plant. A better remedy is to remember that the plant grows 6 feet tall and wide, so give it plenty of room. When it needs pruning to control size, cut it back severely in the spring just before it begins growing. It should be pruned about as severely as the forsythia and at about the same time, which is early spring.