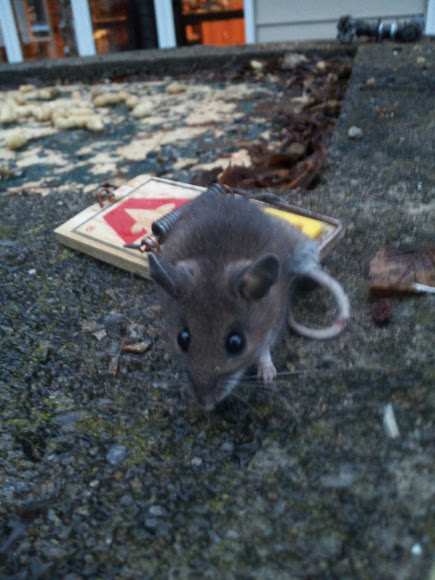 The white-footed mouse (Peromyscus leucopus) is a rodent native to North America from Ontario, Quebec, Labrador, and the Maritime Provinces (excluding the island of Newfoundland) to the southwest USA and Mexico.[1] In the Maritimes, its only location is a disjunct population in southern Nova Scotia.[2] It is also known as the woodmouse, particularly in Texas. Adults are 90–100 mm (3.5–3.9 in) in length, not counting the tail, which can add another 63–97 mm (2.5–3.8 in). A young adult weighs 20–30 g (0.7–1.1 oz). While their maximum lifespan is 96 months, the mean life expectancy for the species is 45.5 months for females and 47.5 for males. In northern climates, the average life expectancy is 12–24 months.[3] Female with sucklings This species is similar to Peromyscus maniculatus. Like the deer mouse, it may carry hantaviruses, which cause severe illness in humans.[4] It has also been found to be a competent reservoir for the Lyme disease-causing spirochete, Borrelia burgdorferi.[5]

Caught this critter in the ceiling over my den. Hate to trap these creatures but they carry hantaviruses as well as Lyme Disease, which I had, twice. This guy only had his tail caught, so I carefully released him outside where he scampered off before I could get the "after" shot. Last time I saw him, he was heading under the deck heading towards the house. Merry Christmas country mouse :)

Removed from the mission 'Signs of Wildlife' because it is not a 'sign' but is 'actual' wildlife.

Hi Katelew02! Yup - still alive. I took it out back and released it. It was unharmed.

Cause it looks like it! Gross sorry but it is

Was it still alive

Hi HazelMarley! Thanks for the comment. I think they are neat little creatures which was why I set it free.

Hi HemantKumar! I took this with my smart phone and I didn't have time to type in the real story :). Pretty sure it's a white footed mouse... Thanks! Happy Holidays!

Unknown spotting r u sure ?